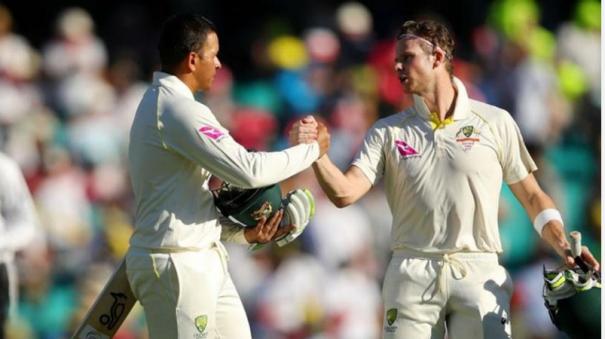 Sydney: Australia scored 475 runs for the loss of 4 wickets at the end of the 2nd day of the 3rd Test against South Africa. Usman Khawaja was close to a double century while Steve Smith also scored a stunning century.

Australia scored 147 runs for the loss of 2 wickets in 47 overs on the rain-affected first day of the tournament in Sydney. David Warner scored 10 and Marnus Labuschenne scored 79 runs and was dismissed. Usman remained unbeaten on 54 runs. The Australian team continued to play the 2nd day yesterday.

Steve Smith along with Khawaja built the innings. Khawaja smashed his 13th century off 206 balls with one six and eight fours. While Steve Smith, who crossed his 30th century, scored 104 runs off 192 balls with 2 sixes and 11 fours, Keshav Maharaj was bowled out.

Khawaja and Smith added 209 runs off 377 balls for the 3rd wicket. After this, Travis Head played aggressively. He scored 70 off 59 balls with one six and 8 fours before being bowled by Rabada. Travis Head added 112 runs off 117 balls along with Khawaja for the 4th wicket.

At the end of yesterday’s 2nd day, Australia scored 475 runs for the loss of 4 wickets in 131 overs. Usman Khawaja was unbeaten on 195 off 368 balls with one six and 19 boundaries and Matt Renshaw with five.

Escaped Khawaja: Australian opener Usman Khawaja was on 119 when Unrich Nordge missed a catch. Khawaja took full advantage of this and is poised to close in on a double century. Khawaja may hit a double century in today’s 3rd day match.

Overtook Bradman.. Steve Smith scored a century in the Sydney Test cricket match. It was his 30th century. With this, he crossed the record of legendary Dan Bradman who had scored 29 centuries. Meanwhile, Smith has overtaken Michael Clarke to become the 4th highest run-scorer for Australia in Test cricket. Smith, who is playing in his 92nd Test, has so far scored 8,647 runs at an average of 60.89. Former captain Michael Clarke scored 8,643 runs in 115 matches. Ricky Ponting tops the list with 13,378 runs.

The start of the third day’s play has now been slightly delayed due to rain.