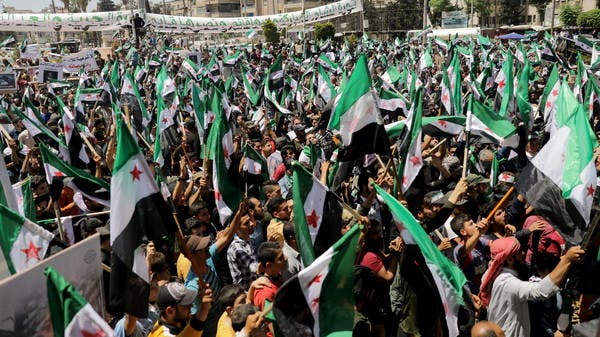 
The villages and towns of Jabal Al-Zawiya in the countryside of Idlib, northwestern Syria, witnessed protests against the Turkish forces stationed at 10 military points in the area.

The demonstrators expressed their anger at the violations committed against the people as a result of the Russian bombing and the regime forces, while the Turkish forces (the guarantor according to the armistice agreement) stood without moving, according to the Syrian Observatory for Human Rights.

On July 17, the Syrian regime forces launched a bombardment on the village of Sarja, killing 6 civilians.

Also, the regime’s missile shells targeted the town of Ahsem, south of Idlib, on the same day, killing 8 civilians (4 children and 4 women), and wounding 16 civilians, mostly women and children.

Also, this morning, 7 civilians from one family were killed by missiles fired by the regime forces on the village of Iblin in the southern countryside of Idlib.

The agreement included several items, most notably the establishment of a safe corridor 6 km long to the north and south of the “M4” road, which constitutes a strategic axis that crosses the Idlib region, and the conduct of joint patrols along the “M4” road in Syria starting from March 15, 2020.

In addition to stopping all hostilities on the contact line in Idlib.

The war in Syria has killed more than 380,000 people, displaced millions and displaced more than half of the population inside and outside the country, as well as destroying infrastructure, draining the economy and exhausting various sectors.

Tokyo Olympics .. The Egyptian team loses to the “tango dancers”

The head of Kalmykia was vaccinated against COVID-19