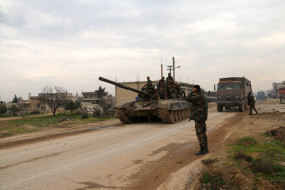 Several rebels, including their foreign trainers, were either killed or wounded in Wednesday’s Syrian-Russian attacks, Xinhua news agency quoted state media as saying. They targeted rebel training camps in the rural areas of Idlib.

Eport said foreign instructors were teaching local rebels how to conduct drone strikes. The nationality or number of foreign trainers targeted have not been disclosed.

Meanwhile, reports said the rebels’ bases, vehicles and drones were destroyed during the attack, which was planned after a reconnaissance operation.

In Idlib, rebels used drones to attack Russian military positions in coastal areas. In 2015, Russia officially joined the side of the Syrian government in the fight against rebels in Syria.