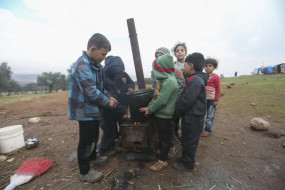 Digital Desk, Geneva. The Syrian people are facing a lot of hardships and are going through a lot of suffering due to the war that has been going on for more than a decade. This warning has been given in the latest report of the United Nations (UN).

A 50-page report released by the UN Independent International Commission of Inquiry on Syria said on Wednesday that millions of people in Syria are suffering and dying in displacement camps, while resources are running out and aid providers are raising their hands. are.

The commission’s chairman, Paulo Pinheiro, said Syria may not return to the fighting, but it appears unlikely that this will happen.

According to the report, which covers the period from January 1 to June 30 this year, fighting continues in the north of Syria.

The latest UN estimates show that between March 1, 2011 and March 31, 2021, 306,887 civilians died in Syria, Xinhua news agency reported. This means an average of 83 civilians have been killed in conflict every day for the past decade.

Armed conflict broke out in Syria in 2011 and then turned into a full-fledged war.

In recent years, delegations from the Syrian government and its opposition have held several rounds of peace talks in Geneva but a solution has not yet been found.