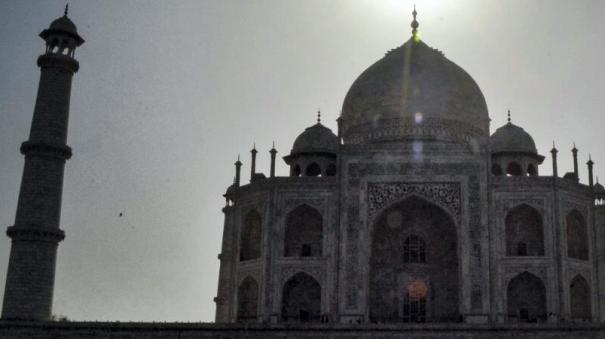 New Delhi: Indus Maha Sabha members banned from serving sweets at Taj Mahal in Agra The Allahabad High Court was pleased to hear that the petition seeking an order from the Archaeological Survey of India to open 22 unoccupied chambers in the Taj Mahal and file a report was sweet.

The Taj Mahal was built of marble in the 6th century by Shah Jahan, one of the Mughal emperors. There are reports that the Tejolaya Shiva temple, currently located in BJP-ruled Uttar Pradesh, was demolished to make way for it. The statues of the temple are also suspected to be in 22 locked rooms that have not been opened in the Taj Mahal. A case has been filed in the Allahabad High Court of Uttar Pradesh seeking an order to open it.

The petition filed by Dr. Rajneesh, a BJP spokesperson in Ayodhya, has been accepted for hearing by the court. To celebrate this, the Hindu Mahasabha distributed sweets in front of the Taj Mahal yesterday. Seeing this, the Uttar Pradesh police detained them and sent them back. Tourists in the Taj Mahal are also not allowed to serve sweets.

Thus, the Taj Mahal, the wonder of the world, is now considered to be the target of the Hindutva mob. This is said to be due to the fact that Muslims are allowed to perform special prayers on Fridays in the Taj Mahal, built by the Mughal emperor. King Shah Jahan built this Taj Mahal in memory of his wife Mumtaz.

Thus, Muslims are allowed to observe Mumtaz’s remembrance daily at the Taj Mahal. As such, it is not the first time the Taj Mahal has been prosecuted. Prior to this, in 2015, permission was sought to perform Aarti on the stage of the Taj Mahal. The case was filed in the District Civil Court by seven of the aggressors.

Responding to the notice, the court dismissed the petition saying that the Taj Mahal was a monument and not a temple. Prior to this, the petition of Hindutva filed in the Supreme Court in the year 2000 was also dismissed.

In this petition, 109 archeological evidences for the existence of the temple were shown. The case, which is currently being re-filed, is expected to come up for hearing in the Uttar Pradesh High Court soon.