Tamil cricketer who achieved success in cricket by watching the movie Kana | U.S. team qualifies for Under-19 World Cup 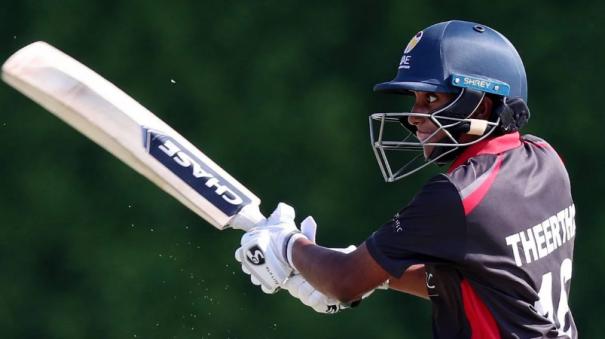 Tirtha Satish from Tamil Nadu has achieved cricket by watching the movie Kana. He plays for the United Arab Emirates.

The qualifying rounds for the Asian teams for the 2023 Under-19 Women’s T20 World Cup Series were held in Malaysia. The United Arab Emirates has qualified for the World Cup. Tirtha Satish from Tamil Nadu plays a key role in the success of the team. Left-arm wicket-keeper Batter. The 18-year-old has been playing cricket for the U.S. senior team. It seems that the reason he is playing cricket with enthusiasm is because of the movie Kana which was released in Tamil last 2018.

“Our daughter Tirtha has been interested in various sports since she was a child. She has been involved in all sports like athletics, basketball, football and cricket. .

At the age of 17, she was named to the U.S. women’s senior cricket team through a series of training sessions. Now she is playing in the first ICC Under-19 Women’s T20 World Cup, “said Tirtha’s father Satish Selvanambi.

He played 5 innings in the World Cup qualifiers and scored 175 runs. Tirtha is also the captain of the American team. Dhoni, Jemima Rodriguez and Cup seem to be his role models. “After watching the movie Kana, I decided that we could try the same. I have come here now,” says Tirtha simply.

This is the first step of his dream. He is going to create many achievements in the game based on him. He has also played in the Fairbrake International T20 series with international cricketers. The Under-19 Women’s T20 World Cup is set to take place in South Africa next year.