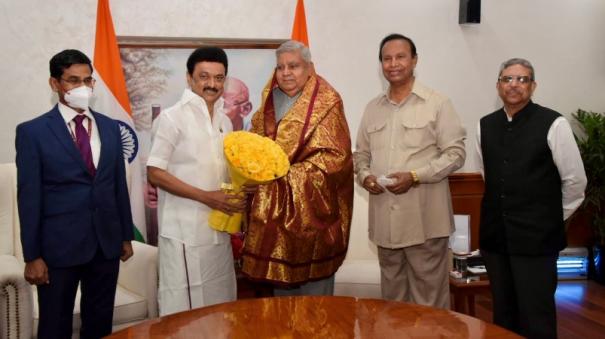 Tamil Nadu Chief Minister M. K. Stalin, who arrived in Delhi last night from Chennai, met and congratulated Jagadeep Dhankar, who has been elected as the 14th Vice President of the Republic, this morning.

Following this, he will pay a courtesy call on Drarubathi Murmu, who has been elected as the 15th President of the country, and congratulate him.

After that, Chief Minister Stalin will meet Prime Minister Narendra Modi this evening. During this meeting, he will thank the Prime Minister for his contribution to the success of the recently concluded 44th International Chess Olympiad and for participating in the opening ceremony of these competitions.

Earlier, the Tamil Nadu Chief Minister was infected with Corona while he was going to Delhi to invite the Prime Minister to attend the opening ceremony of the Chess Olympiad.