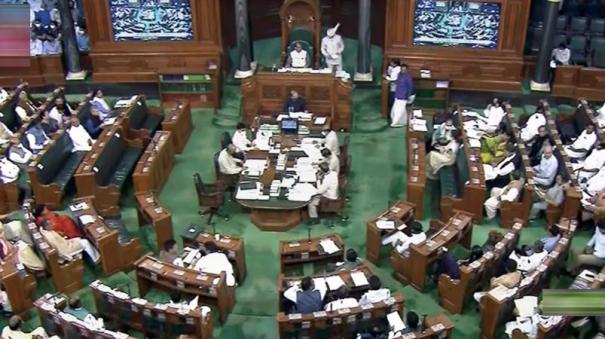 New Delhi: Two social research organizations, PRS India and Prime Point Foundation, have published statistics on the activities of MPs during the Lok Sabha Winter Session. In this, Dharmapuri DMK MP. DNV Senthilkumar has topped. He has scored a total of 453 points and is ranked 17th in the national level. He raised 384 questions, spoke in 66 debates, proposed 194 debates, and introduced 3 individual bills.

In this regard, MP said to ‘Hindu Tamil Vektik’ newspaper. Senthilkumar says, “I have been working in Parliament for the people without expecting points from the first day. After the opportunities for certain parties in the debates are over, if you ask the Speaker for an opportunity and wait in the House, you get more opportunities to speak. I will use these opportunities and always keep the problems of the public and the constituents in mind,” he said.

Tenkasi MP of Congress among Tamil Nadu MPs. Dhanush M. Kumar has got 2nd position. He scored 409 marks and got second position in 384 questions. Both the top 2 candidates have 100% attendance at the Lok Sabha sessions.

B. Rabindranath Kumar, the only MP of AIADMK, has spoken in the most 97 debates. Former Union Minister of State S.S. Palani Manickam has got very few points. Only 16 of Tamil Nadu’s 39 MPs have participated in individual bill filing. South Chennai Constituency DMK MP Tamilachi Thangapandian has filed maximum 8 bills.

Questions in Parliament are answered by letters to MPs in the House and personally. Maharashtra MPs are leading the way in seizing these opportunities. Their average score is 312. Rajasthan scored 259, Kerala 255, Andhra Pradesh 226 and Tamil Nadu 218. Srinivasan, the founder of Prime Point, told ‘Hindu Tamil Vektik’ daily, “MPs should come forward to file more individual bills that are not related to their party. It is necessary for the constituents to vote based on their performance in the Parliament and not just the social media and media activities of the MPs who are re-contesting in the elections. Only then will MPs work for the welfare of the people,” he said.

The data has been released on behalf of Prime Point Foundation since the last 14th Lok Sabha. This organization has been selecting and awarding the best MPs at the national level for the last 4 years. Garventhan of Palani, who was MP from Congress, also received this award. Ramasuppu of Tirunelveli also got it.