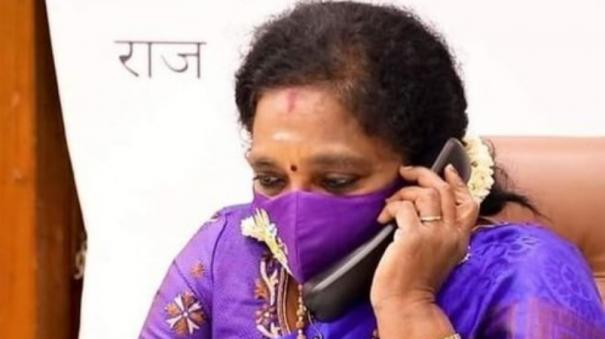 Puducherry: Governor Tamilisai Soundararajan has said that steps have been taken to bring back 30 Tamils ​​trapped in Myanmar.

In this regard, he posted on social media:

I am sorry to know that brothers from Tamil Nadu and Puducherry are suffering in Myanmar. I contacted Minister of State for External Affairs Muralitharan over the phone and inquired about the steps being taken to bring them back safely.

Muralitharan said that according to the information received by the central government, 54 people are in Myanmar and all arrangements have already been made to bring back 30 of them.

Muralitharan said that although the number of Tamils ​​trapped in Myanmar is 54 according to the information received by the government, after learning the news that more than 300 people may be trapped through the media and other sources, efforts are being made by the central government through the embassy to find out the true situation.

“People who have left our country have been duped. They have been taken to Bangkok, China with the promise of getting jobs in the IT sector. Then, they are used in cybercrime to freeze the accounts of many people. This comes under cybercrime. Also, the passports of all of them are held by the abductors,” said Muralitharan. .

“Not only that, all those who have left here are not in the places defined by the Myanmar government. They are staying in places controlled by the army/militants. Due to this, the Myanmar government is also facing difficulties in collecting information about them. At the same time, the central government is making efforts to rescue them within the legal provisions, even if they do not have passports. “If anyone informs that people they know are trapped there, efforts can be made to rescue them. The central government is paying full attention to rescuing everyone no matter how difficult it may be,” Union Minister Muralitharan said.

Tamilisai Soundararajan has said this.