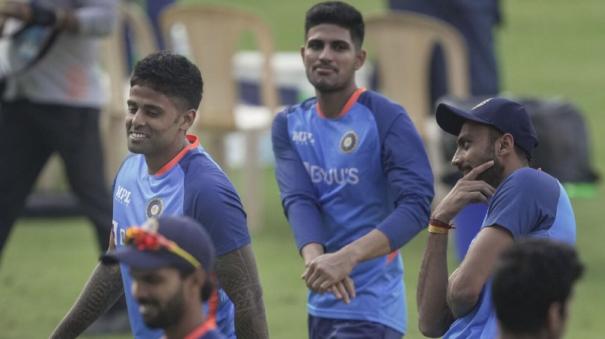 The Indian team led by Hardik Pandya won by 2 runs in the first match of the 3-match T20 cricket series between the two teams in Mumbai yesterday. Chasing a target of 163 runs, Sri Lanka took the game to the last ball and lost all wickets for 160 runs and lost by 2 runs.

In the first match, opener Shubman Gill failed to make the most of his opportunity. His batting approach is not to attack from the first ball. Shubman Gill is a follower of the aggressive style of play after taking root in the field. This is how he acted in the IPL series.

Recently, the Indian team management has been trying to implement a fearless batting approach in T20 cricket. Shubman Gill may therefore focus more on swinging the bat in the powerplay in today’s game. And with Ruduraj Gaekwad waiting for his chance, Shubman Gill will be forced to perform at a high level to cement his place in the team.

Similarly, Suryakumar Yadav, who failed to perform well with the bat in the first match, may focus on performing with intensity. Meanwhile, Deepak Hooda and Axar Patel, who batted brilliantly at crunch time in Wankhede, are likely to get another top performance.

Debutant Shivam Mavi caught everyone’s attention by bowling 4 overs and conceding only 22 runs and taking 4 wickets. Umran Malik also took 2 wickets and put pressure on the Sri Lankan batsmen with his speed. This pace may once again challenge the Sri Lankan batsmen. In spin, Yuvendra Chahal bowled 2 overs and scored 26 runs. He is forced to perform well to retain his place in the team.

As for the Sri Lankan team, if they lose today’s match, they will lose the series. This may lead the team to be more attentive. The bowling of the team is dependent on Hazaranga and Deeksana. The spin partnership bowled 8 overs together for 2 wickets and conceding 51 runs in the first match. They may once again try to put pressure on the Indian batting line-up.