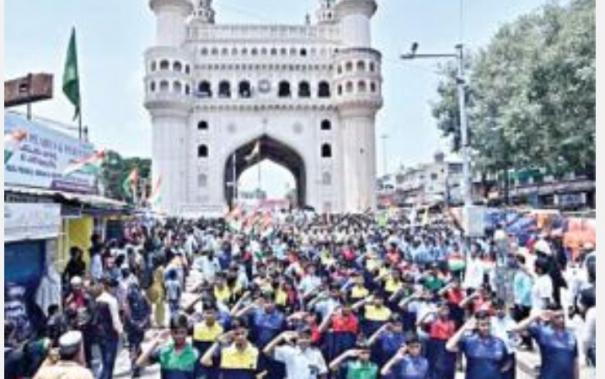 Hyderabad: Accepting the invitation of Chief Minister Chandrasekhara Rao, National Anthem was played on roads across Telangana at 11.30 am yesterday. Hearing this, the public stood where they were and paid their respects to the National Anthem for a minute and then concentrated on their work.

Telangana is celebrating 75th Independence Day as a Diamond Jubilee year. On this occasion, yesterday, on the invitation of Chief Minister Chandrasekhara Rao, arrangements were made to play the song of our national anthem ‘Janagana Mana’ in all cooperatives, government offices, panchayat, panchayat council offices, schools and colleges across the state of Telangana.

At exactly 11.30 am yesterday, the national anthem was played simultaneously throughout the state. Knowing this in advance, many people gathered on the road carrying the national flag.

All those traveling in buses, cars, jeeps and bikes stopped the vehicles and got down. Even Hyderabad Metro trains were halted for up to a minute. All the passengers traveling in the metro stood up.

At exactly 11.30 Siren was sounded twice and after that our National Anthem was played. At that time everyone from children to adults, poor to rich, men and women all stood up for a minute while singing the National Anthem.

Chief Minister Chandrasekhara Rao and some other ministers participated in the event at Abits Joint Road area. The state of Telangana stood still for a minute from 11.30 am to 11.31 am yesterday when the National Anthem was played.