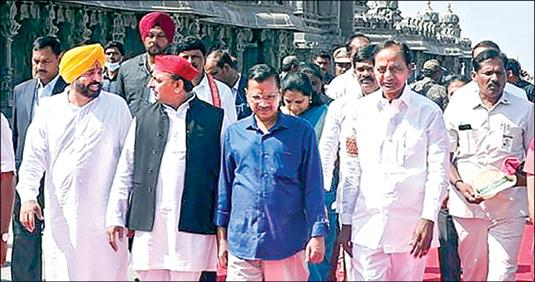 Chief Minister Chandrasekhara Rao invited all these leaders who had come to Hyderabad earlier and entertained them at his house. After that everyone went to Yadagiri Gutta Lakshmi Narasimha Temple and worshiped the Lord. After that everyone attended the opening ceremony of Khammam District Collectorate. Telangana Chief Minister Chandrasekhara Rao said in the public meeting: This Kammam public meeting will be a turning point for political change in the country. Although we have 70 thousand tmc of water available in the country, we use only 20 thousand tmc of it. Chennai city has done many struggles for water.

Is there a huge dam in our country like China? There is a sort of cold war between states over water.

Public sectors like LIC, Railways will not be privatized. Agnipat project will be cancelled. Many schemes which are working successfully in Telangana state will be implemented across the country. All in all, in 2024, BJP will go home and PRS will go to the country. Thus K. Chandrasekhara Rao spoke.

When Kerala Chief Minister Pinarayi Vijayan spoke, Chandrasekhara Rao has decided to fight against the central government. I fully support this,” he said.