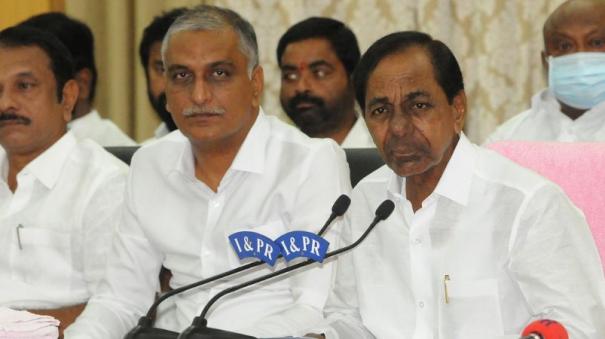 Hyderabad: A large number of technicians, engineers and engineering college students from Telangana capital Hyderabad joined the BJP. This has come as a shock to the ruling TRS party.

In the coming year 2024, the general elections for the Legislative Assembly and Lok Sabha constituencies are going to be held in the state of Telangana. In this, the ruling party Telangana Rashtriya Samithi Party (TRS) is working diligently to achieve a ‘hat-trick’ by winning for the 3rd time in a row. For this, Telangana Chief Minister and TRS leader K. Chandrasekhara Rao is busy working. However, the BJP has highlighted the shortcomings of the TRS party’s rule for the past 9 years and has shocked the ruling party by winning the last 2 by-elections.

Currently, BJP is actively working to win the Munukodu by-election, which is going to be held for the 3rd time. Due to this, there is a great rivalry between BJP and TRS parties. Also, Prime Minister Modi, BJP National President JP. Natta, Union Home Minister Amit Shah and many others have been making frequent visits to Hyderabad to strengthen their party.

Thus, Telangana Chief Minister K. decided BJP as their first enemy. Chandra Shekhara Rao is working hard to oust the BJP not only in Telangana but also at the national level. But BJP in its style, in Telangana, in the name of ‘Agarsh Telangana’, apart from actors and actresses, sportspersons, sportswomen, retired government employees, police officers, doctors are joining their party. The BJP is trying to woo actors Nitin, Jr. NTR and former Indian women’s cricket team captain Mithali Raj.

In this case, before last 2 days, IT experts, engineers, engineering college students from Hyderabad have joined BJP in the presence of Telangana state BJP president Pandi Sanjay Kumar. They are going to work for the BJP in the upcoming 2024 elections. Last 2 times they supported Telangana Rashtra Samithi Party. But since the government led by Chandrasekhara Rao has not taken any steps by claiming to provide job opportunities to the educated youth, IT and engineering students have sided with the BJP this time.
Leaning. This is Telangana IT Minister and Telangana Chief Minister’s son K.T. Ramara is shocked.