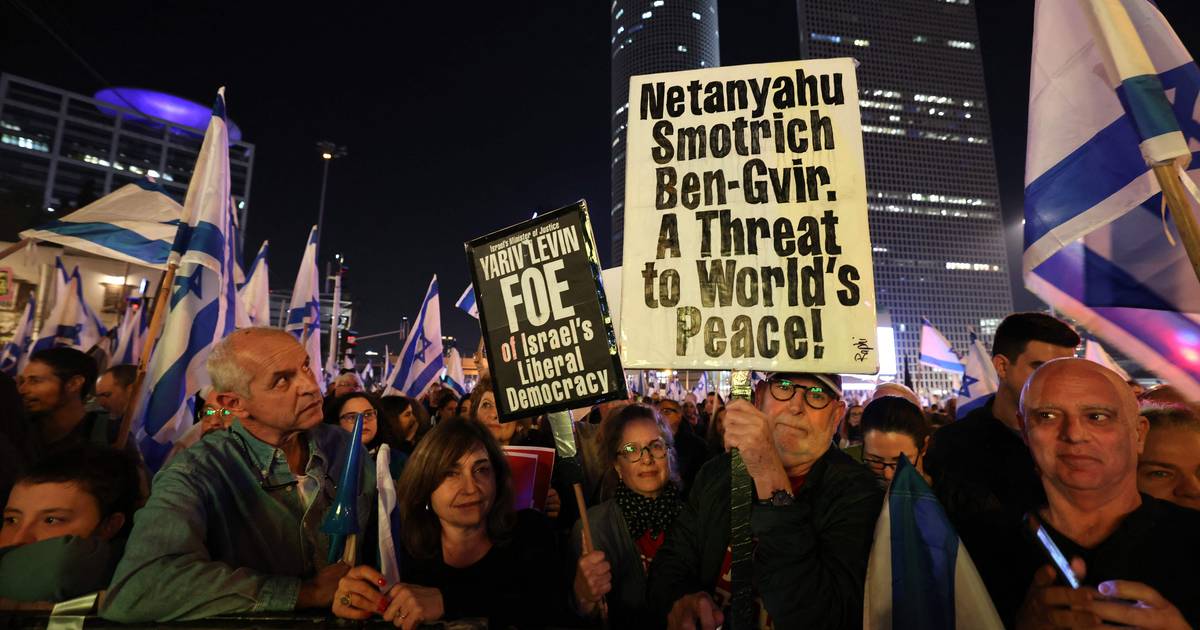 For the third Saturday evening in a row, protests have been held in Israel against the judicial reform plans of Prime Minister Benjamin Netanyahu’s new far-right government. She wants to make radical changes that limit the influence of the Supreme Court in favor of parliament.

In Tel Aviv alone, some 50,000 demonstrators showed up tonight, police officials told Kan public broadcaster. “People who love our country defend democracy, the rule of law, the idea of ​​coexistence and the common good here,” Yair Lapad, leader of the centrist opposition party Yesh Ati and former prime minister, said. The Times of Israel. Last week, some 80,000 people took to the streets in the country’s second largest city and several thousand more in Jerusalem and Haifa.

The protests are against the reform proposals that Justice Minister Yariv Levin launched on January 11. This mainly concerns the constitutional review of laws enacted by the Knesset, the Israeli parliament. This review (whether laws conflict with the Constitution) takes place at the Supreme Court. That can scrap new ‘unconstitutional’ legislation. But if it is up to Levin, parliament will soon be able to reverse that decision by a simple majority of votes.

Levin’s bill also gives the government full control over the appointment of judges, including Supreme Court justices. It will also be able to appoint to that Supreme Court a President and Vice President who were not already part of it and may not even have been judges of a lower court. The plans also end the independence of legal advisers from ministries and their opinions are no longer legally binding.

Powerless in the face of civil rights restrictions

The proposals undermine Israeli democracy, critics say. As the legislature replaces the judiciary, the independence of the rule of law disappears. Former Supreme Court president Aharon Barak compared the plans to “poison pills” that will turn the country into a “hollow democracy” in which citizens are powerless against curtailment of their rights. He spoke of “the beginning of the end” of the modern state of Israel.

Opposition leader Yair Lapid called the bill “not legal reform” but “radical regime change”. Israeli President Yitzhak “Isaac” Herzog said he was deeply concerned about the controversy over the reform plans. “We are in the grip of a profound disagreement that is tearing our nation apart,” he said in a speech on Sunday. He says he is trying to prevent a “historic constitutional crisis”.

Attorney General Levin and other proponents of the reform plans say the Supreme Court has overstepped its jurisdiction over the past two decades and “severely constrained” elected coalitions and ministers in their implementation of government policy. Prime Minister Netanyahu firmly supports the proposals, saying they will “strengthen democracy.”

He promised an ‘in-depth discussion’ in a parliamentary review committee in which the opposition is also represented. “We will complete reform legislation that will resolve what needs to be resolved, fully protect individual rights and restore public confidence in the justice system,” he said.

The controversial reform plans come as Prime Minister Netanyahu is on trial for corruption. The now 71-year-old politician has argued since he was charged in 2019 that the legal system is biased against him. Justice Minister Levin linked his reform plans to the prime minister’s “legal tribulations” for the first time last week. The charges against him in three cases “convinced the public of the need to limit the powers of the judiciary,” heard The Times of Israel say him in parliament on Monday.

Government critics have long accused Netanyahu and allied MPs of wanting to reform the justice system so that the prime minister can escape the criminal charges against him. While Levin did not portray Netanyahu’s lawsuit, which began last May, as the impetus for his reform plans, his remarks to the Knesset underlined the tangle of political and personal interests surrounding the controversial issue.

There is also tension between political interests and the judiciary in the case of Interior Minister Aryeh ‘Arie’ Deri. He was sentenced to a suspended prison sentence last year for tax fraud after a deal with the judiciary. In addition, the 63-year-old leader of the ultra-Orthodox Shas party promised to step out of politics.

Despite that commitment, Deri was appointed minister again on December 29. Before that, the Knesset had amended a law that stipulated that someone cannot become a minister after being convicted in the previous seven years. Parliament changed that to “a sentence of effective imprisonment,” which was not the case with Deri.

The Supreme Court on Wednesday declared the appointment invalid because it violates the deal that did not allow the politician to go to prison. In addition, Deri was sentenced in 1999 to an effective prison term of three years for fraud and bribery. The Supreme Court therefore ruled that Prime Minister Netanyahu should fire him. The right-religious party, which is crucial to the government with eleven parliamentary seats, then indicated that it will leave the cabinet if Deri is no longer allowed to be part of it.

Israel’s 37th government, led by Netanyahu, is the most right-wing and religious ever. His conservative-liberal Likud party forms a coalition with two ultra-Orthodox and three ultra-nationalist parties.