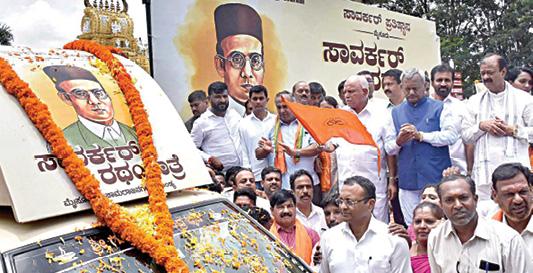 In this case, Savarkar Rath Yatra has been started for 8 days from 23rd to 31st on behalf of BJP. Former Chief Minister Yeddyurappa inaugurated the Savarkar Rath Yatra in Mysuru by waving the saffron flag. The vehicle decorated with Savarkar’s image went to Samrajnagar, Kodagu, Mandya, Ramnagar and other districts.

Yeddyurappa said, “The trend of insulting Savarkar, who fought against the British, is increasing in recent times. Hence, Savarkar Rath Yatra is conducted to educate the people about the history of Savarkar. It will also feature speech programs, songs, drama etc.” he said. In this case, the Sriram Sena organization has announced that they are going to put pictures of Savarkar and Bala Gangadhara Tilak all over Karnataka on the occasion of Vinayagar Chaturthi on 31st.

Congress and Muslim organizations have opposed the Savarkar Ratha Yatra. This has caused tension in the districts of Mysore, Mandya, Samrajnagar and Kodagu. Police security has been put in place as a precautionary measure.