Thanks to the voice of a pro-Kurdish lawmaker, Sweden avoids the resignation of its government 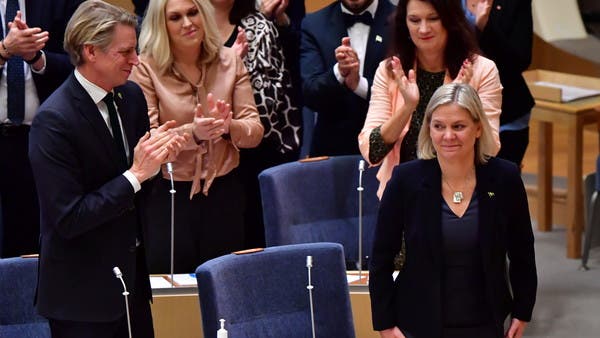 The Swedish government averted a major political crisis on Tuesday, with a motion of no-confidence in parliament failing thanks to the voice of a pro-Kurdish lawmaker opposing concessions to Turkey to facilitate Sweden’s accession to NATO.

By one vote, the impeachment motion against Interior and Justice Minister Morgan Johansson fell, and would have prompted Prime Minister Magdalena Anderson to resign.

The far-right and the right-wing parties managed to collect 174 votes out of 289, according to the results of the vote in Parliament, but it needed a majority of 175 votes to bring down Minister Johansson.

Anderson had announced that she would resign if the opposition won the vote of no-confidence targeting the minister belonging to her party, and the opposition accuses him of failing to address the emergence of gangs in Swedish society responsible for a wave of settling accounts and bloody shootings.

On Tuesday morning, independent MP Amina Kakapavah, who was a fighter with an Iranian Kurdish group before taking refuge in Sweden and becoming an MP in 2008, said she would not vote for the opposition, after weekend negotiations with the social democratic government. “I am satisfied,” she added, hours before the polls.

Kakapavi had threatened that she would vote against the minister if she did not get guarantees on the complex negotiations conducted by Sweden with Turkey over its accession to NATO.

“Should we restrict our freedom of expression and protest under Erdogan’s orders?” she said in parliament. “The newspapers described me as representing Turkish interests instead of Swedish interests, but Swedish sovereignty is what matters to me,” the radical left MP added.

Since mid-May, Turkish President Recep Tayyip Erdogan has been opposing Sweden and Finland’s accession to NATO, accusing the two countries of harboring “terrorists” from the Kurdistan Workers’ Party (PKK) and the Kurdish People’s Protection Units (YPG).

In November 2021, Emine Kakapava provided a decisive vote in the election of Prime Minister Magdalena Anderson, after receiving from the Social Democrats a declaration of support for the Kurdish People’s Protection Units.

On Tuesday, the Social Democratic Party confirmed that the agreement, which contradicts Turkey’s demands to cut Swedish support for the Kurdish People’s Protection Units, is still in effect.

The motion of no-confidence comes three months before the September 11 general elections, after which elected representatives will choose members of the next Swedish government, which may be a right-wing majority, with the support of the far-right.

But support for the Social Democrats has risen sharply in opinion polls since Magdalena Anderson came to power after Social Democrat Prime Minister Stefan Lofven resigned.