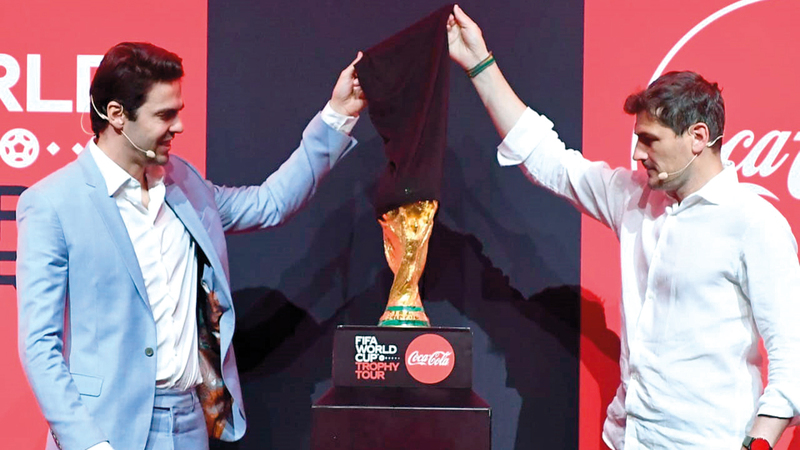 Yesterday, Dubai witnessed the start of the journey of the original version of the FIFA World Cup in its first foreign station, as part of a tour that includes 51 countries, before reaching its final stop in Qatar, which will host the 2022 tournament, and a wonderful celebration was held at the Coca-Cola Arena in Dubai, with the attendance of The Secretary-General of the Emirates Football Association, Mohammed Al Dhaheri, with the participation of the former stars of Brazil and Spain, Ricardo Kaka and Iker Casillas, in addition to the stars of the UAE national team in the World Cup “Italy 90”, Abdul Rahman Mohammed, Khaled Ismail and Abdul Qadir Hassan, along with the captain of the women’s team Nouf Al-Enezi.

He added, “The UAE has become an important station in hosting important international sporting events.”

The 2022 World Cup tour, sponsored by Coca-Cola, includes 51 countries and regions, while the World Cup will visit all member states of the International Federation (211 countries) by 2030.

Claudia Navarro, Vice President of Marketing for Eurasia and the Middle East, Coca-Cola, said that they are pleased to provide the spirit of enthusiasm for the most famous tournament in the world of sports and football for the fans in Dubai.

For his part, the former Brazilian star Kaka said that he was honored to participate in hosting the first leg of the World Cup tour sponsored by Coca-Cola, which starts from Dubai, and added, “The memories of winning the 2002 World Cup with the Brazil national team are still vivid in my memory, because football for me is more than just a sport. It is my life and my passion.”

For the first time in its history, the World Cup will visit several countries in the Middle East and the Arabian Gulf, such as Oman, Bahrain, Kuwait, Lebanon and Saudi Arabia on its penultimate stop, before landing in the host country Qatar.

• Kaka, Casillas and the UAE national team’s 90 stars participate in the celebration at the “Coca-Cola Arena”.