The anecdotes of the African nations continue .. the “battle” of Corona and a wrong national peace 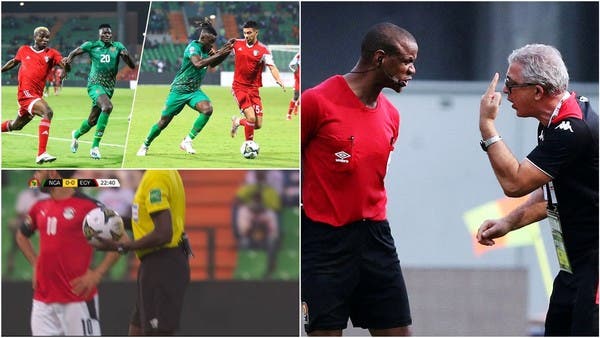 The current version of the African Nations Cup began its excitement since the first round, with strange facts that occurred throughout the matches that started on Sunday, the most prominent of which was the threat of the Burkina Faso team not to play the opening match, and the referee of the Tunisia-Mali match, which ended the meeting before the end of its original time, and the appearance of the Sudanese team with two shirts Different during the Guinea-Bissau match.

The Burkina Faso team questioned the results of the Corona tests that were held on the eve of the opening match of the tournament, which brings them together with the owner of the land, the Cameroon team.

The tests showed that the national team coach, in addition to five players, had been infected, which raised the suspicion of team officials, who revealed that the swabs were taken by an “unknown medical team.”

Team captain Bertrand Traore said in press statements in this regard: It is a scandal, they cannot deprive us of our players in this way 24 hours before the match, we will not accept this decision.

And the country’s Football Association demanded that the tests be repeated, threatening not to participate in the opening meeting, to which the Cameroonian Minister of Health responded in a tweet via his account on “Twitter”: The CAF tests for its teams, referees and missions are the responsibility of the African Union itself, which depends on a foreign and independent laboratory for this purpose.
“K” stressed the accuracy of the tests that the Burkinabe players underwent in an official letter, and that the tests were carried out in an accredited laboratory and there is no reason to protest.

Invalid balls in the Egypt-Nigeria match

Although the tournament regulations stipulate that there are 10 approved balls in each stadium, Gambian referee Bakari Jasama had to change 3 balls in less than 25 minutes during his administration of the Egypt-Nigeria match.
Players from both teams complained that the air pressure was insufficient in the balls, which caused the match that ended with the defeat of the Egyptian team with a clean goal more than once.

The Sudanese team appeared in two different shirts during the two halves of the match that brought it together with Guinea-Bissau on Tuesday and ended in a goalless draw.

The “Jedian Falcons” started the first half in a complete red uniform with a white color on the shoulders, but in the second half the team played in a different uniform that did not show the white color.

On Wednesday, the Sudanese Football Association published the statements of Yasser Al-Jaali, the director of the first team, in which he justified this incident, saying: The organizing committee of the tournament adopted two shirts in red and the same in white before the start of the African Nations.

He added: We used the two red shirts in the Guinea-Bissau match, with one shirt in each half, so that the players would not be affected by the high humidity factor, which led to their sweating.

He explained that wearing a shirt in each half is among their directions in the new approach to the teams.

The referee of the match between Tunisia and Mali ends the match before its scheduled time .. twice!

Zambian referee Jani Sikazwe ended the match between Tunisia and Mali in Group F, which ended with the latter’s victory with a clean goal, twice before the match reached the original time of the 90th minute.

In the 85th minute, the referee announced the end of the match, but retracted his decision, to return in the 89th minute again and blow his whistle, which ignited a crisis on the grounds of the “Limbe” stadium.

The security forces intervened to protect the referee from the objections of the players and administrators of the Tunisian team, and after 20 minutes, the fourth referee decided to call the two teams to complete the remaining time of the match after assigning Sikauzzi to manage it.
Mali’s players returned to the field, but the Tunisian team refused to return, and confirmed that it would file an official complaint with the African Union in order to repeat the match in full.

Mondher El-Kabeer, the coach of the Tunisian national team, attacked the referee of the match, in statements to reporters, in which he said: The players bathed in the snow for 35 minutes before being called to return to play again. lost) and then the final whistle blew.

The wrong anthem for the Mauritanian national team was played

Because of the events of the match between Tunisia and Mali, the African Union announced the postponement of the match between Mauritania and Gambia, which follows it, at the same stadium, “Limbe” for a period of 45 minutes.
Before the start of the match and during the playing of the national anthem of the two teams, the “Al-Mourabitoun” was surprised by the playing of an old anthem of their country, so that the organizing committee stopped it and played another anthem that was also incorrect.
After repeating the wrong anthem more than once, the Mauritanian national team players sang their anthem without music before the match started.