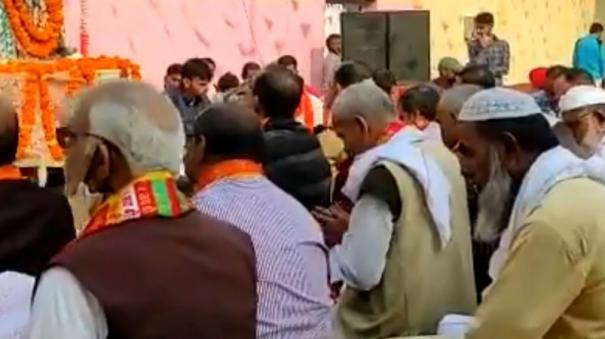 Navratri is one of the Hindu festivals celebrated all over the country. Muslims in Muzaffarnagar jail in Uttar Pradesh have observed Navratri fast along with Hindu inmates in order to maintain religious unity.

Jail officials say, “There are about 3,000 prisoners in Muzaffarnagar Jail. Out of which 1100 are Hindus and 218 are Muslims. During the holy month of Ramzan, Hindus also fasted along with Muslim prisoners. In that way Muslim prisoners fasted along with Hindus on the occasion of Navratri. After the fast, food is prepared and served to the prisoners. Milk, fruits and chapatis were prepared for those fasting.” They said

As one fasting Islamic inmate spoke, “We preach unity here. People should learn how religious harmony is maintained in prison. We all live together here.”

Speaking to another jailer, he said, “We are proud to be an example of religious harmony. When our Hindu brothers fast in Ramadan, we also fasted together with them in Navratri. Love is the only answer for love.”