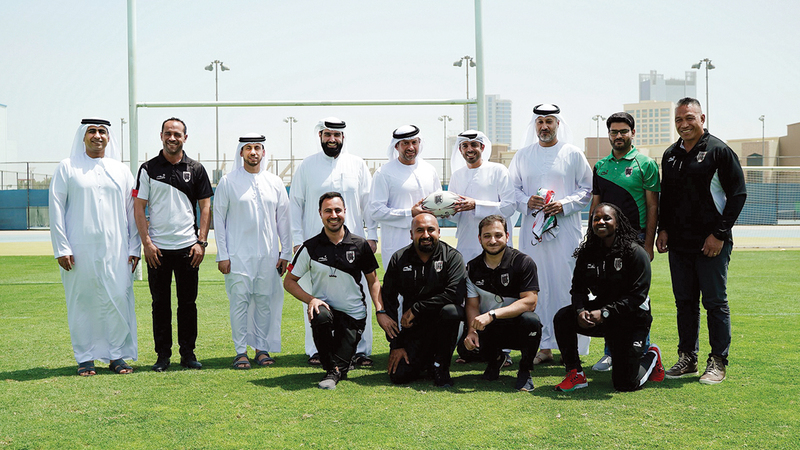 Sheikh Suhail bin Butti Al Maktoum, Executive Director of the Sports Development Sector at the General Sports Authority, visited the headquarters of the Emirates Rugby Federation in order to study the reality of the game and ways to develop it by taking advantage of the achievements made by the rugby teams during the last period.

Sheikh Suhail bin Butti Al Maktoum said: “We appreciate the great work that the federation is doing to develop the game, as the UAE has become the capital of Arab and Asian rugby, and the UAE’s male and female champions have made a distinguished presence on the podiums in this sport.”

Sheikh Suhail bin Butti Al Maktoum visited the rugby stadiums and the headquarters of the Arab and Asian Federations, familiarizing themselves with the reality of the game’s facilities and the development it has achieved over the past years and the plans that the federation aspires to achieve in the coming period.

The two parties discussed the terms of the general budget of the federation, the reality of external participation in the current year, and ways to benefit from the achievements made in rugby to encourage young sports talents to practice and create a new generation of athletes. Sheikh Suhail bin Butti Al Maktoum was briefed on the most important achievements of the federation and The gold medal in the Asian Rugby Sevens Championship, in addition to the women’s team achieving silver in the Asian Championship and bronze in the Arab Rugby Sevens Championship. During the meeting, they discussed ways of cooperation to enhance the opportunities for the UAE to host continental and international meetings and tournaments in rugby.