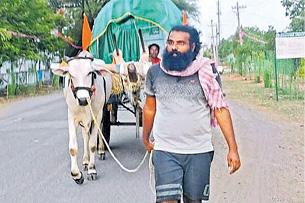 Vijayawada: The mother-in-law and her brother-in-law have left in a bullock cart to file a case in the Supreme Court, deciding that justice will not be served due to a problem in the sister-in-law’s house and the support of the groom’s house by the ruling party in Andhra Pradesh.

National Brotherhood Day was celebrated across the country on the heels of yesterday. Many of these brothers and sisters exchanged their love in person and on social media. But a brother, who is seeking justice for the atrocities committed at his sister-in-law’s house, is leaving for Delhi with his sister and mother in a bullock cart on Brother’s Day. He told reporters in Vijayawada yesterday;

My name is Naga Durga Rao. Farmer. Our hometown is NDR District, Nandikama Zone, Muppallu Village. My sister is Navyata (28). She was married to Narendra Nath from Chandapuram village in 2018. For the wedding, which took place in the presence of the elders, we presented the groom with a dowry of Rs. But after the wedding, it was revealed that the groom’s behavior was not right. All evil habits have existed.

Also, the mother-in-law, Nathanar was cruel too. He used to get drunk often and beat my sister. We lodged a complaint at the Chandrapad police station. But with the support of the ruling party, the police did not accept the complaint. Thus my sister came to the house where she was born with no other option. We spent so much and got married. We bought everything we asked for. I did not take proper care of my sister though. Instead they beat and kicked and tortured. Thus, I decided not to get justice for my sister in Andhra Pradesh and decided to file a case in the National Human Rights Commission in Delhi, and in the Supreme Court. Due to this I am leaving for Delhi in a cow cart with my sister and mother Jyoti. From there we will return home after completing the case. Thus he said.