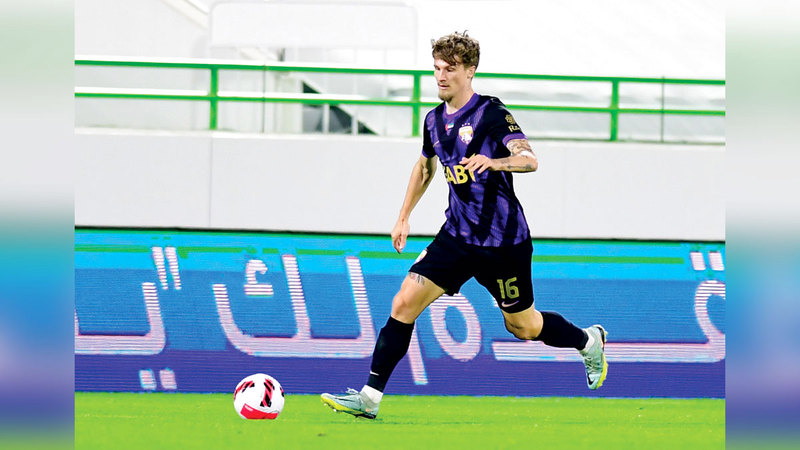 The defender of the new Al Ain team, the Croatian Tin Edvai, who moved to the ranks of the “leader” during the current transfers, found himself in an unenviable position in his first appearance with his new team, as besides the fever of the beginnings, the conditions of the match put him in front of Al Bataeh, which ended with Al Ain winning 3- 2 pm the day before yesterday, within the 13th round of the ADNOC Professional Football League, in the most difficult test after fellow Brazilian defender Eric Gorges was sent off from the minute 1 + 45.

The defending champion was on his way to achieving an easy victory over Al-Bataeh, as he advanced with two clean goals in the first 35 minutes of the match, but the expulsion situation caused the “leader” to enter the most difficult test during the second half, as his players, specifically the defense line, found themselves under pressure, This required more diligence and courage from them at a time when it was clear that there was no harmony between the Croatian Yedvaye and the other Ivorian defender, Kwame Kwedo.

Al Ain coach, Sergey Rebrov, admitted during the press conference after the match that the task of the “leader” during the second half was very difficult, given that his team’s circumstances required him to play with ten players after Eric Jurgens was sent off, and at the same time the importance of maintaining his progress against Arsenal. Offensive to the landlords.

The coach indicated that his team played two different halves during one meeting, and said: “We achieved a deserved victory at the expense of Al-Bataeh, and I believe that Al-Ain performed well until the moment Eric was sent off with the red card. We prepared many opportunities and finished the first half ahead with two clean goals.”

It is the second time during the current season that the “leader” has completed a match with ten players after facing Al-Jazira in the third round, when Bandar Al-Ahbabi got a red card, and it ended with Al-Ain losing 1-2, but it is the first in which he wins while he is missing a number.

On the other hand, the coach of the Al-Bataeh team, Moroccan Said Shakhit, said that the reason behind their loss was due to the selfishness of his team’s players, and explained: “We should have taken advantage of the opportunities we got during the confrontation, but some players were selfish.”