The coalition destroys the Houthi air defense system in Marib 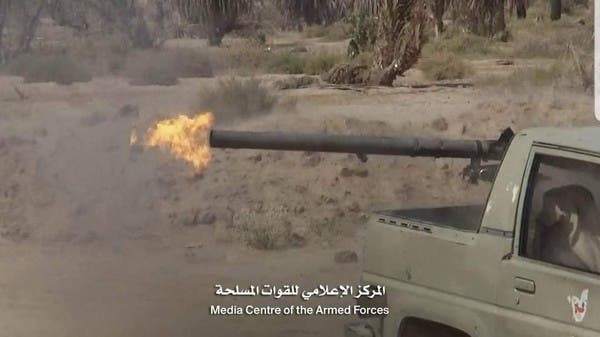 The Coalition to Support Legitimacy in Yemen announced today, Friday, that it carried out 28 targeting of Houthi militias in Marib and Al-Bayda within 24 hours.

The coalition confirmed the destruction of the militia’s air defense system and 19 vehicles on the Ma’rib front, in addition to the killing of 105 Houthi elements in the recent targeting of Ma’rib and al-Bayda.

In another context, the coalition said that it carried out 7 targeting operations on the western coast to protect coastal forces and civilians.

This comes while the Yemeni army forces, with the support of the coalition aircraft, managed, today, Friday, to defeat the Houthi militia from several locations in the Juba front, south of Ma’rib Governorate.

The media center of the Yemeni army confirmed that the army forces, backed by the popular resistance, defeated the Houthi militia from several locations on the Juba front.

He explained that the aircraft of the Coalition to Support Legitimacy destroyed the militia’s reinforcements on the same front and inflicted heavy losses on them in equipment and lives.

Violent battles took place between the forces of the National Army and the Houthi militia on various battlefronts in the southern front of the Marib Governorate.

The Yemeni army in the Juba front

According to military sources, the army’s artillery was also able to destroy 3 militia crews, and those on board were killed or wounded.

The fighters of the Coalition to Support Legitimacy also launched intensive air strikes targeting the Houthi militias in the south and west of the governorate, which resulted in deaths and injuries among the militias and the destruction of their vehicles and equipment.

In addition, the Yemeni army spokesman, Brigadier General Abdo Majali, confirmed, on Friday, that the army has made significant advances in the southern fronts of the Marib Governorate in successful offensive operations against the Houthi militia.

He explained in a press statement that the operations included several fronts, including Ma’la, Umm Rish, al-Amud and Thana, and ended with the restoration of important sites and greatly exhausted the militias in their combat capabilities.

He said that the offensive battles also resulted in the killing of dozens of these terrorist elements, and the arrest of a number of them, and combat crews and quantities of medium and light weapons and ammunition were recovered.

The battles in the Serwah front (archive)

On the western fronts of Marib Governorate, the Yemeni army’s official spokesman confirmed that a number of militia attacks had been thwarted, and that they had sustained losses in equipment and many. He pointed out that the army forces on the Sirwah front carried out a number of successful attacks and ambushes against the Houthi coup militias, inflicting losses on them in personnel and equipment.

Brigadier Majali said that the losses of the recent battles among the militias included the destruction of 9 armored vehicles, 7 combat crews, a “23 m / i” cannon and a BMB vehicle, stressing that all of this was destroyed by the army’s artillery, which carried out a series of painful strikes against the militias and destroyed their fortifications.

He added, “The combat aircraft of the countries of the Coalition to Support Legitimacy destroyed, with dozens of raids and air strikes, the “23 m / i” artillery, two BMB vehicles, a weapons store, 10 armored vehicles and 12 combat kits carrying weapons, equipment and reinforcements for the Houthi militia.”