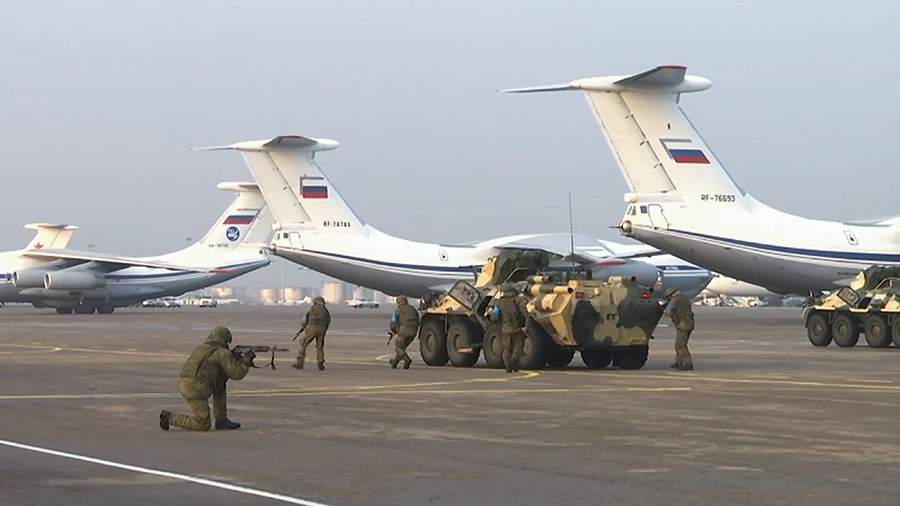 Units of the Russian contingent of the peacekeeping forces of the Collective Security Treaty Organization (CSTO) at the Alma-Ata airfield conduct trainings, during which they work out the prevention of emergency situations. This was announced on Sunday, January 9, by the press service of the RF Ministry of Defense.

“Units of the Airborne Forces from the Russian peacekeeping contingent of the CSTO peacekeeping forces, deployed to the airfield of Almaty in the Republic of Kazakhstan, marched in convoys to the mission areas, where, after clarifying the situation, they began to protect vital facilities and social infrastructure”, – the message says.

It is noted that the aircraft of the military transport aviation of the Russian Federation continues the transfer of the main forces of the Russian contingent of the CSTO peacekeeping forces to the airfields of Alma-Ata and Zhetygen of the Republic of Kazakhstan.

Earlier that day, it became known that the CSTO peacekeeping contingent was guarding a number of strategic objects in Kazakhstan. The republic ensures compliance with the state of emergency in the regions.

It also became known about the security forces killed during the protests in the republic. Their number increased to 18, two of them were beheaded. In addition, the Republic’s National Guard reported the death of two servicemen. The Ministry of Health of Kazakhstan said that the participants in the riots also attacked doctors: more than 10 doctors were injured.

On January 5, the President of Kazakhstan dismissed the government, headed the Security Council and at its meeting announced that he had applied to the Collective Security Treaty Organization (CSTO, which includes Kazakhstan, Kyrgyzstan, Tajikistan, Armenia, Belarus and Russia) for help in overcoming the terrorist threat … After that, Armenian Prime Minister Nikol Pashinyan, who holds the post of CSTO chairman, said that the organization would send collective peacekeeping forces to the republic for a limited period of time in order to stabilize and normalize the situation in that country.