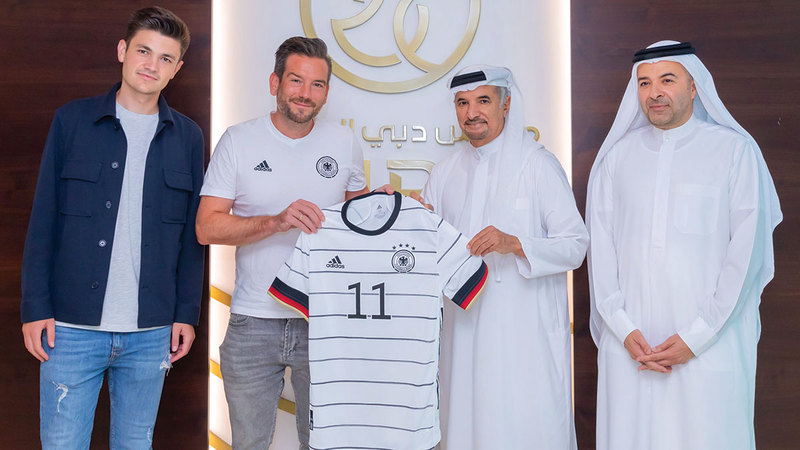 The delegation of the German Football Association visited the headquarters of the Dubai Sports Council, where it met with the Secretary-General of the Council, Saeed Hareb, and the Assistant Secretary-General, Nasser Aman Al Rahma, and was briefed on the role of the Council in managing and developing sports work in Dubai, and the various sports events that it organizes annually. The German delegation included: Jens Bosch, first head of operations and special projects in the German Football Association, and Gillian Stimberger, director of the German national team, which is one of the most prominent teams in the history of football, as it won the World Cup four times, in addition to several international titles. .

Saeed Hareb discussed means of cooperation with the German Football Association and providing support to the German Football Association, by providing the facilities and services necessary to hold their friendly matches in Dubai, and organizing the training camp in preparation for the 2022 FIFA World Cup. Germany is one of the most prominent teams Which chose to set up its camps in Dubai, in preparation for the start of the World Cup at the end of next November.

Saeed Hareb gave an explanation to the delegation about the role played by the Dubai Sports Council in developing the sports sector, and its efforts in hosting and organizing various local and international sports tournaments and events, organized and supervised by the Council, and setting plans and work strategies for years to come, in a way that supports the dissemination of sports of all kinds among All segments of society, whether at the level of community sports, or at the level of professionalism and hosting the most important international tournaments.

Hareb confirmed the readiness of the Dubai Council to provide all the facilities that the German team needs for the success of its camp in Dubai. His Highness Sheikh Mohammed bin Rashid Al Maktoum, Vice President and Prime Minister of the UAE and Ruler of Dubai.

The German Federation delegation expressed its happiness to be in Dubai, and praised the sports facilities and facilities designed according to the highest international standards that Dubai provides everywhere, which greatly helps in encouraging training, exercise and physical activity.

The German delegation is pleased with the sports facilities and facilities designed according to the highest international standards in Dubai.