The “Derby” of Victory and Al Wasl.. Dubai is decorated with “blue” 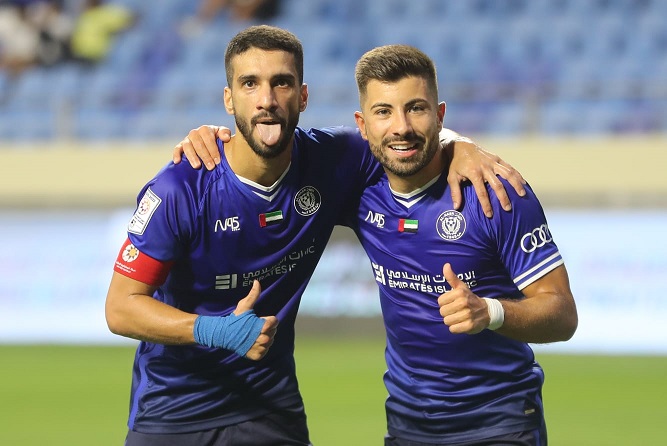 Al-Nasr regained the tone of victory by defeating its neighbor Al-Wasl in “Derby Bur Dubai” 3-2, Thursday, at Al Maktoum Stadium in the 22nd round of the ADNOC Professional League. He succeeded in making three goals with which the “Brigadier” returned to victories again after 30 days of absence from achieving a positive result after losing in two matches and drawing in one.

Before today’s match, Al-Nasr did not achieve any positive result in the past three rounds, after losing in two rounds and drawing in a match, as he had achieved the last victory on the fifth of last March, at the expense of the Emirates team when he won by four.
Al-Wasl started the match very quickly, and Ali Saleh managed to score the first goal after just less than 40 seconds of an organized attack in which the player entered the penalty area and hit the goal, announcing the goal of progress for the “Emperor”, and the victory took approximately 10 minutes until he regained the reins. Matters and managed to equalize through Portuguese Tozi, taking advantage of Diaa Sabaa’s magic pass to score the amendment goal for the Brigadier in the 18th minute.
Diaa Al-Sabaa continued his hobby and succeeded in making the second goal for Brigadier General Al-Nasrawi, and striker Tigali managed to take advantage of the cross pass to score the second goal from an elaborate header, making the score 2-1 in the 38th minute of the first half. Algerian player Mehdi Obeid, who scored a single shot from below the goalkeeper, landed in the net seconds before the end of the first half. The first half ended with Al Nasr leading 3-1.
In the second half, Al-Wasl team tried to return to the match and score a goal to reduce the difference, and the danger increased with the beginning of the second half, but without effectiveness or reaching the goal of Abdullah Al-Tamimi, Al-Nasr goalkeeper, who kept his net until the 91st minute of the match, until Al-Wasl managed to score a goal. The difference was reduced by the best player of Al-Wasl Ali Saleh, taking advantage of a cross pass inside the penalty area. Al-Wasl tried to increase the offensive effectiveness in the last moments of the second half, but he did not succeed in that, so the match ended with the victory of Al-Nasr 3-2.