The duo of Liverpool and Khalifa Drogba .. Stars awaited in Cameroon 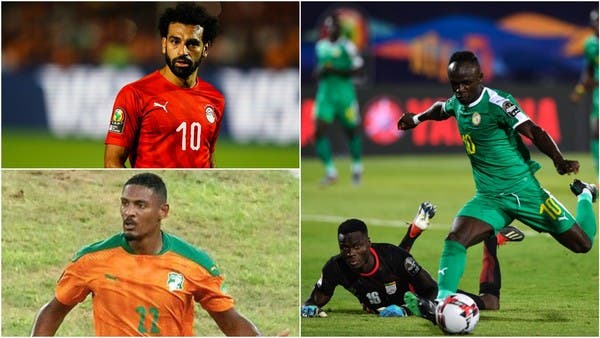 Football fans are waiting for the stars of the African continent to emerge in Cameroon during the African Nations Cup, which begins on Sunday and will continue until February 6, starting with Liverpool and Egypt star Mohamed Salah, to the last fortresses of Chelsea and Senegal, Edward Mendy.

Mohamed Salah scored 37 goals for Liverpool in 2021, and he remains the key player in the Reds’ matches.

In the Egyptian national team as well, Salah is the star of the “Pharaohs” with 43 goals in 73 matches, but without leading his country to the top yet.

With a 2-1 loss to Cameroon in the 2017 final, the Egyptians suffered a heavy loss at the Cairo International Stadium in the round of 16 of the continental championship on their home soil against South Africa 1-0.

In the 2018 World Cup, Salah reached the World Cup injured after the harsh intervention of Sergio Ramos in the Champions League final. He missed the first match, and despite scoring two goals, he was unable to prevent Egypt from returning from Russia with three defeats.

Thus, the current African Nations Cup is an opportunity for Salah to achieve his first title with the Egyptian national team.

Senegal is the leading African team according to the FIFA rankings, and its most prominent star is Sadio Mane, for being the best former African player who also ranked fourth in the Golden Ball rankings in 2019, Liverpool will miss Mane greatly as he heads to Cameroon, especially as he He scored ten goals for the English club this season.

However, the 29-year-old is in dire need of winning Africa’s biggest football tournament, after Senegal lost to Algeria in the 2019 final, as the west African country has never won the title.

After being crowned European champions with Chelsea, 29-year-old Edward Mendy is considered the best goalkeeper in the continent, and by far the only African candidate for the best goalkeeper award at the FIFA Awards, finishing second behind Gianluigi Donnarumma.

The Senegalese National Sports Press Association chose Mendy as the best professional player outside the country, and he also won the best goalkeeper award given by the European Football Association “UEFA”.

Mendy has a personal revenge after he was forced to withdraw from the previous tournament before the third match, after he broke his left hand during the warm-up in the last group game against Kenya.

Alfred Gomes replaced him and was unable to avoid defeat in the final against Algeria (1-0).

But after rising quickly from a goalkeeper in 2015 to the European champions in 2021, Mendy is ready to rule Africa.

Riyad Mahrez, the second African player in the Golden Ball and the European runner-up with Manchester City, is the actual leader and spark of genius for the Algerian national team.

Mahrez has become the icon of the “Desert Warriors” since his brilliant free kick that gave Algeria a last-minute victory against Nigeria (2-1) in the semi-finals of 2019.

Mahrez, a youngster in the Parisian suburbs, had previously awarded the Algerians their second African Cup of Nations title. If he manages to retain the title, he will be in the ranks of Rabeh Majer, the architect of the 1990 title, and the 1982 World Cup champions (winning over West Germany) and 2014 (reaching the round of 16).

Although raised in the southern suburbs of Paris, trained in Auxerre and selected for France’s squad to cry out the rookies, Haller chose Ivory Coast, his father’s home country.

Since he was called up for the first time in November 2020 and scored goals, Haller has become the expected striker for “Elephants”.