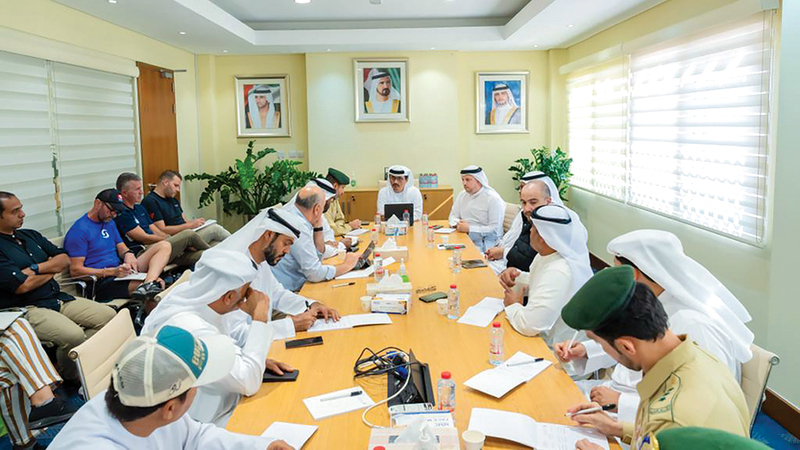 The Higher Organizing Committee of the Ladder Cycling Championship held a meeting with the supporting government agencies and work teams, to put the final touches to the third race in the seventh season, which is the elite race for men scheduled to be organized on the eighth of this month. Members of the Supreme Organizing Committee, Muhammad Al-Mousa, Chairman of the Technical Committee, and Rami Al-Nabulsi, Chairman of the Finance and Promotion Committee, confirmed during the meeting that the new race will be the first in the Peace Championship, a large part of which is organized within the city of Dubai, within the historical and modern areas, and the conclusion will be in the area The ladder and the Marmoum Nature Reserve, with a large participation of more than 200 riders, which increases the splendor of the race, and gives it a great addition to the level of celebration of Dubai’s successes and the path of development and prosperity that it is experiencing.

The launch will be from Sheikh Saeed’s house in the historical Shindagha neighborhood, an expression of the importance of the region and the house, which is a source of pride for all, as it contains memories of immortal historical stages in the life of Dubai and the homeland. The race track extends over a distance of 172 km, and it will be the most diverse in the areas it passes through, which includes, in addition to the start side from the Saruq Al-Hadid Museum in the Shindagha area, passing through the Infinity Bridge to Port Rashid, then the Union Museum, passing through the 2nd of December Street, and the intersection Sheikh Zayed Street, then Happiness Street and the Museum of the Future. Riders will also pass the Meydan Hotel and Manama Street, then Sheikh Zayed bin Hamdan Al Nahyan Street, all the way to the Expo intersection, and from there to the Al Qudra area, which witnesses competition for a distance of 68 kilometers within the tracks of the nature reserve, passing by the Saruq site. Iron in the ability zone, all the way to the finish line.

The plans of the race work teams were reviewed, and the presence of ambulances and support vehicles, water distribution points, the movement of accompanying cars, and the television broadcast of the race were reviewed, which takes into account showing the most beautiful shots of the historical and modern areas and the natural areas that the riders who qualified to run the race will pass through from the elite athletes from the UAE and other countries. GCC.

• The race will be held on the 8th of this month, and it is the third in the season, and it extends over a distance of 172 kilometers.