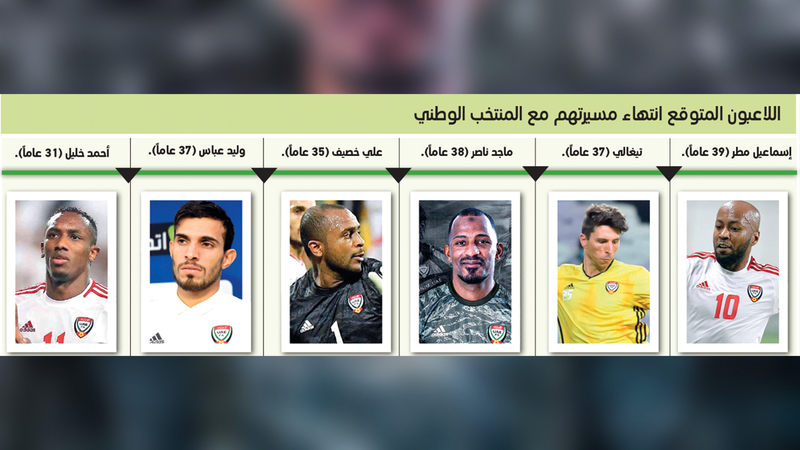 Emirates football enters a new era after the national team failed to qualify for the 2022 World Cup in Qatar, with the loss of “Al-Abyad” in the Asian qualifiers against Australia with two goals to one, as the next stage will witness radical changes at the level of the list of players who will join the team to participate in the Cup Asia 2023, and the upcoming benefits until the 2026 World Cup qualifiers.

Losing the dream of the national team qualifying for the 2022 World Cup will contribute to writing the end of the journey of a large number of players who have contributed to many achievements for the Emirates football in the past years. The players are young, while the team’s list included only six players over the age of 30, they are Sebastian Tigali, Caio Canedo, Omar Abdel Rahman, Bandar Al Ahbabi, Walid Abbas and Abdulaziz Haikal.

The list of players who are expected to be excluded from the accounts of the technical staff in the coming period is led by the historical star of “Al-Abyad” and Al-Wahda Club, Ismail Matar, who completed his 39th year last April, after a busy career for “reputation” with the national team since his first match. Officially with the team in July 2004 against Kuwait, while the number of his matches with the UAE national team reached 124 international matches, scored 34 goals, and contributed to the achievement of “Al-Abyad”, the first title in my history by winning the 17th Gulf title in the UAE in 2007.

And the second player whose joining the national team has become in doubt is Al Wahda striker Sebastian Tigali, who is 37 years old, and despite joining the “White” list for the first time in October 2020 under the leadership of Colombian coach Jorge Luis Pinto, but the historical scorer of “Al Annabi” » He participated in only 14 matches, and scored three goals over two years with the national team.

The goalkeeping center is one of the most prominent positions that will witness the exclusion of players from the main elements of the team in the past years, namely Al-Ahly youth goalkeeper Majed Nasser, 38, who participated for the first time with the national team in 2005 at the age of 20 under the leadership of Dutch coach A.D. Moss, as he fought “Heart of the Lion” 71 international matches, along with Al-Jazira goalkeeper Ali Khaseef, 35, who joined Al-Abyad in October 2009 under the leadership of Slovenian coach Serisko Katanic, and Khaseef played 43 international matches with the team.

The name of the veteran defender in Al-Ahly youth, Walid Abbas, stands out, after he completed his 37th year on June 11, and Abbas is one of the few players who played more than 100 international matches, with his score reaching 101 matches, with his participation in the last Australia match.

On the other hand, the decline in the level of international striker Ahmed Khalil, 31, may contribute to the early end of his career with the team, after he was dispensed with by the Al-Ahly youth team last season, and the “brown deer” did not join any team, as he participated for the first time with the national team. Al Watani January 2008 at the age of 16 as one of the youngest players to participate in the national team under the leadership of French coach Bruno Metsu. Khalil played 106 international matches and scored 47 goals.

Nasser Al Shehhi: The UAE national team is in the period of “handing over the custody” to a new generation

The former administrator of Al-Wasl Football Company, Nasser Al-Shehhi, said that the coming period must witness radical changes in the lineup of the national team, pointing out that “Al-Abyad” is currently in the period of “handing over the custody” to a new generation that will lead the team in the upcoming tournaments.

Al-Shehhi told “Emirates Today” that the names that the technical staff relied on in the past years proved that a major change must take place by dispensing with the services of older players, and giving the opportunity to young players, to present the new to the national team.

He added: “The team’s list witnessed the inclusion of a large number of young players, such as Ali Saleh, Abdullah Hamad, Hareb Suhail, Muhammad Al-Attas and Khalifa Al-Hammadi, and I believe that this group should be the basic strength on which the team will be built in the next stage.”

He concluded: “There is no doubt that some players who have experience should be used, but the main reliance will be on young players to build a new team that will present good levels in the upcoming tournaments, starting from the 2023 Asian Cup until the 2026 World Cup qualifiers.”