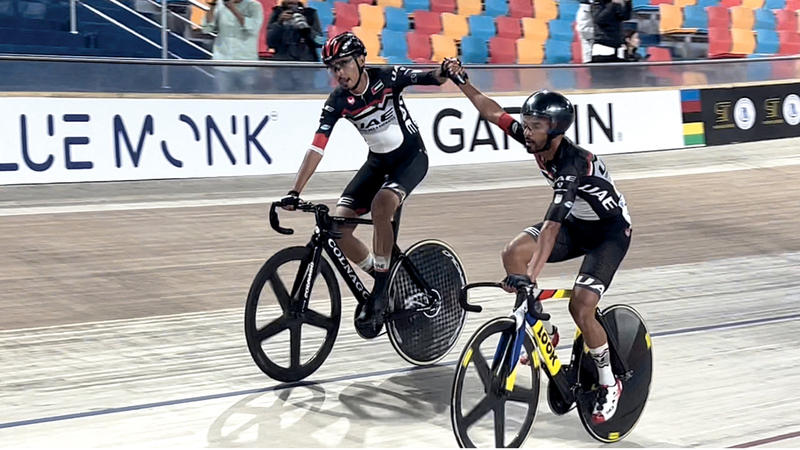 The UAE cycling team won the hardest gold medal in the track championship of the combined Arab championship currently being held in Cairo, after Ahmed Al-Mansoori won, yesterday, the first place in the “aluminum” race, which consists of four stages (scratch-tempo-exclusion-points), which is the Olympic race And the race witnessed Youssef Mirza’s horrific and deliberate fall for the second day in a row during the race, but he returned to participate before the end of the time specified for him in order to keep the competitors away from Al-Mansoori to crown the UAE with the strongest gold in the track championship.

The technical director of the UAE national team, Abdullah Suwaidan, told “Emirates Today”: “The aluminum gold that the UAE obtained, was a sacrifice on the part of Youssef Mirza, in order to crown his colleague Ahmed Al-Mansoori with the medal, as he was able to remove the strong competitors observing him in the race, in addition to Until Ahmed Al-Mansoori was up to the responsibility, it was a very smart plan, so congratulations to the UAE for winning.”

He added: “The race went through great difficulties, as Youssef Mirza was subjected to a fall, because part of the race plan was the monitoring process, and this monitoring annoys the opponent, and the competitor deliberately obstructed Youssef Mirza, but he rose and made sure to return to the race quickly to win Al-Mansoori.”

The race and the crowning of the Emirates were attended by the President of the Cycling Federation, Mansour Bouassiba, and the Secretary-General, Yasser Al-Doukhi.

On the other hand, the UAE mission continued to win colorful medals in the track championship, as the number of medals until the end of the morning session yesterday reached 32 colored medals, nine gold, 14 silver and nine bronze. Today, the track championship competitions are concluded, as the mountain bike competitions begin tomorrow. The first Arab group for bicycles.