The family of the Yemeni Siamese twins, affection and mercy: They are in good health 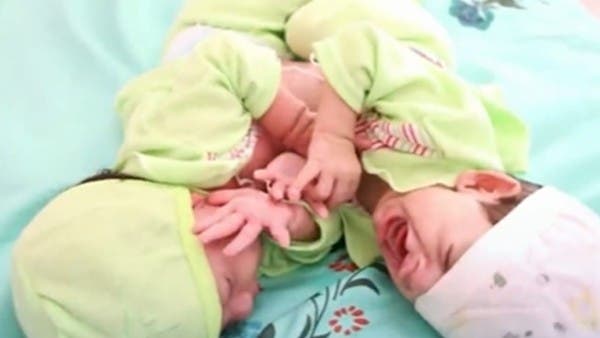 The family of the Yemeni Siamese twins, Mawaddah and Rahma, are awaiting the completion of the procedures for their transfer to Riyadh, while their family confirmed that their health condition is good so far, and that they are waiting for the operation.

The family also appreciated the directives issued by the Custodian of the Two Holy Mosques, King Salman bin Abdulaziz, to transfer the twins to the Kingdom for the necessary examinations to separate them.

The father of the two girls, Hudhayfa Al-Firisi, said that Mawadda and Rahma were born in March, and they are two months old.

He added that after conducting the tests, it was found that the two girls are joined in the abdominal area, and they share a liver and part of the small intestine, and that their health is good.

For her part, the Director of the Governmental Friendship Hospital in Aden, Dr. Kefaya Al-Jazei, explained that the two children were transferred to the nursery under the supervision of the King Salman Center, and travel procedures and quick preparations to transfer the two children to the Kingdom are currently underway.

The Custodian of the Two Holy Mosques, King Salman bin Abdulaziz Al Saud, had directed the transfer of the Yemeni Siamese twins, Mawaddah and Rahma, the daughters of Hudhayfa bin Abdullah Noman, from Yemen to King Abdulaziz Medical City for the National Guard in Riyadh for medical examinations and to determine the possibility of separating them.

The Adviser at the Royal Court, the General Supervisor of the King Salman Humanitarian Aid and Relief Center and the head of the medical team for separating the Siamese twins, Dr. Abdullah bin Abdulaziz Al-Rabiah, explained that this humanitarian gesture from the Custodian of the Two Holy Mosques towards the brotherly Yemeni people is an extension of his many humanitarian positions towards the needy all over the world. The scientist, indicating that the Yemeni Siamese twins, Mawaddah and Rahma, were born in a condition with adhesion to the lower chest and abdomen.

He stressed that the Custodian of the Two Holy Mosques attaches great importance to the Saudi program for conjoined twins, and the program receives support and follow-up from Saudi Crown Prince Mohammed bin Salman, noting that this generous initiative is a continuation of the multiple services provided by the Kingdom of Giving and Humanity to the Arab and Islamic nation and the world at large.