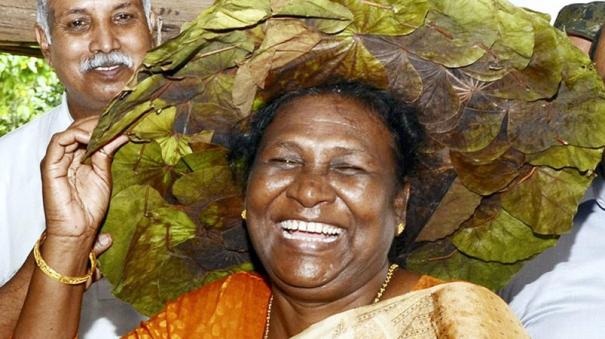 New Delhi: For the first time, the ‘Hindu Tamil’ newspaper predicted on February 5 during the Uttar Pradesh Assembly elections that Draupadi Murmu might be the BJP’s candidate in the presidential election. The murmur of the tribal class, which was announced the day before yesterday in the sense that this is true, has gained many prominences.

Since Narendra Modi became the Prime Minister in mid-2014, many important steps of his government have been unpredictable by the press. The list includes money laundering and the announcement of Ramnath Govind as the presidential candidate.

Similarly, it was not possible to predict the BJP’s candidate in the July 18 presidential election. In this context, on February 5, a news item was published in the ‘Hindu Tamil’ newspaper under the headline ‘Importance of the Uttar Pradesh election in the Presidential election …’.

In it, it was mentioned that Draupadi Murmu, who was the Governor of Jharkhand, was more likely. It was then re-published in the June 19 news. BJP leader JP Natta announced Dhruvpathi Murmu the day before yesterday to confirm this prediction.

Accepting this view, Naveen Patnaik, the Chief Minister of the ruling Biju Janata Dal in Odisha, tweeted in support of Draupadi, the first leader of their state.

Draupadi Murmu, a candidate for the highest office in the country, belongs to the Chandali tribe. Thus, the Jharkhand Mukti Morcha, the ruling tribal party in Jharkhand with the support of the Congress, is expected to support it in no other way.

The BJP is also expected to support Andhra Pradesh Chief Minister Jaganmohan Reddy as he is from a neighboring state. With the support of so many parties, Draupadi’s victory is considered certain.

There are many political benefits to the BJP from Draupadi’s election. The BJP is likely to get substantial tribal votes in the upcoming Gujarat Assembly elections. The BJP, which has been vying for power in Odisha for several years, is likely to reap additional benefits.

The situation is similar in the tribal states of Jharkhand, Madhya Pradesh, Chhattisgarh and West Bengal. In Jharkhand, Draupadi also served as the Governor from 2015 to 2021. It has been revealed that Ramnath Govind, a member of the Dalit community, was elected at the last presidential election and was replaced at the last moment.

Among the candidates announced so far in the presidential election, Draupadi Murmu has received many prominences. Born on June 20, 1958, Draupadi is 64 years old and very young. He will also be the first President to be born in independent India.

As Pratibha Patil was chosen in the Congress-led United Progressive Alliance, Draupadi has got a woman for the BJP. An additional benefit to the BJP is that it elected him as the first governor at the age of 59 and as president at the age of 64, up from a tribal community. The BJP’s initiative in the 2024 Lok Sabha elections is likely to show the political benefits of all this.

Speaking to reporters about his choice, Draupadi Murmu said, “I was shocked and unbelievable to hear the information that selected me. I could not talk much about this. Thanks to all of you though. I will work out the legal plans for the President as set out in the Constitution. My mission is to go and join the public. It is necessary to work with the cooperation of the people’s representatives, ”he said.

Who is this Draupadi?

Thiravupathi Murmu was born in Uberpeda village in Mayurbhanj district of Odisha. She is a graduate of Rama Devi Women’s College, Bhubaneswar. He later became an assistant professor at the Aurobindo College of Integral Education and Research.

The BJP was the party of choice in 1997 for those who wanted to enter politics because of its greater social concern. He became a member of the Rairangpur Municipal Council on behalf of the party.

Draupadi contested for the BJP in the same assembly constituency and was an MLA from 2000 to 2004. At the time, due to the coalition rule with the BJP, the Biju Janata Dal government had a joint minister in charge of trade and transport, fisheries and livestock.

Dhruvpathi, who was also a member of the National Executive Committee of the BJP’s tribal wing, served as the Mayurbhanj district chairman from 2002 to 2009, then again until he became governor in 2013. She was also selected as the Best MLA in 2007 and received the Pandit Neelkanth Award. After the retirement of the Governor of Jharkhand on July 12, 2021, he lived peacefully in his village of Uberbeda.

Bin Draupadi, currently the presidential candidate, has been given the protection of the CRPF Central Forces’ Z Division.

RSS Volunteer to Maharashtra Chief Minister – Who is this Eknath Shinde?