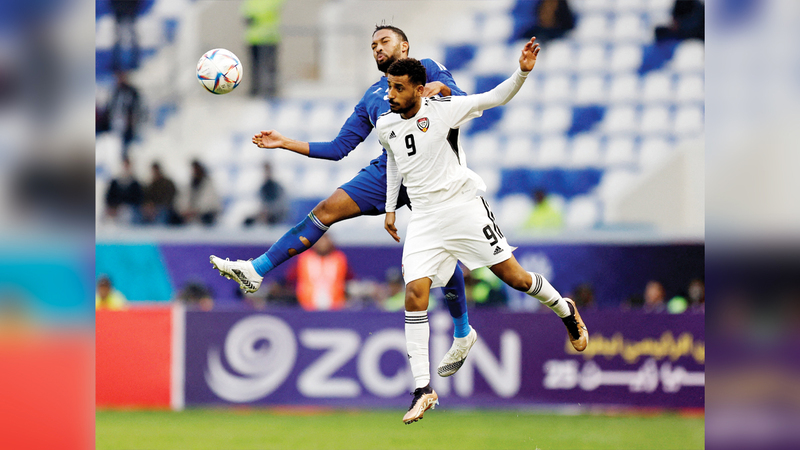 Athletes and technical analysts said that the National Teams and Technical Affairs Committee of the Football Association did not listen to the opinions of the sports street, critics, and the media from the beginning, which demanded not to contract with the current coach of the Argentine national football team, Arwabarina, who achieved negative results with “Al-Abyad” throughout his career that began. Officially since the Iraq match in the 2022 World Cup qualifiers, last March, and Al-Abyad lost it 1-0. Aruabarina’s contract with the national team extends until the next Asian Cup.

Since that match, the national team did not achieve any good results, and was eliminated from the World Cup qualifiers, from the appendix, and then became on the cusp of leaving the “Gulf 25” currently held in the Iraqi city of Basra, after finishing in last place in the second group without points, and became required By defeating Qatar, and waiting for Kuwait to lose from Bahrain in order to pass to the round of four. In total, the national team played five official matches under the leadership of Aruabarrena, winning one, losing four, conceding six goals and scoring three.

The loss the day before yesterday from Kuwait in the second round of the group stage in the “Gulf 25” sparked a state of resentment and anger among the fans of the national team, due to the succession of defeats, and the modest level with which it appeared so far.

It is noteworthy that the technical committee of the Football Association had justified the contract with Aruabarina by the fact that he had experience in Emirati football, after he had previously trained the Al Wasl and Al Ahly youth teams, although he had never led any team before “Al Abyad”. Athletes said that many options for experienced coaches were on the table before the Football Association, before contracting with the Argentine coach, to succeed Dutchman Marvik. They told Emirates Today that club training is very different from teams, and that Al-Abyad was in need of a coach with experience in leading teams, and that “this matter was evident in the Arab Gulf Cup, as well as during the Asian supplement meeting that qualifies for the World Cup against Australia.” .

Responsibility of the Technical Committee

He asked why the league’s top scorer, Ali Mabkhout, was not with the national team, pointing out that although he is not a supporter of interference in the work of any coach, there are some matters that the coach should discuss, and this is the responsibility of the technical committee. Al-Dhabahi added, “A top scorer like Ali Mabkhout cannot be outside the national team. As for me, I was in charge of a club, and I used to sit with the coach and discuss some matters with him, without interfering in technical details.”

In turn, a member of the former Football Association Board of Directors and sports analyst, Dr. Salim Al Shamsi, confirmed that they “were very late in evaluating the work of the federation by the sports street and the media, as it should have been given the opportunity during the first year of its session and to evaluate its work, but despite the delay, it can be fixed.” command.”

Al Shamsi added, “Arwabarina is not the coach of the stage, but we must not forget the past, and we must start developing a future national project, and this matter requires that the National Teams and Technical Affairs Committee sit with the Federation’s Board of Directors, and begin to develop the project through a specific strategic plan to form teams at the level high”.

Regarding the choices of coach Aruabarina, Al Shamsi stressed “the need to provide all the tools for the coach, and give him a space to work, including his choices for the players. The system will not achieve anything.

For his part, the former international player and legal advisor, Salem Hadid, said, “The Sports Street has already expressed its opinion, as well as the critics, regarding the contract with the coach, but there is no life for those who call.” And he stressed that there is a big difference between training clubs and teams, especially in light of the surrounding circumstances, whether with players or other teams. He said, “It is very important to choose an experienced coach, because any match played by the national team is considered a championship, and there is no room for compensation.” Salem Hadid added, “The problem lies in not taking the correct opinion, so the confusion has continued since the 1990 World Cup in Italy, and we wasted money and years.”

Regarding the choices of coach Aruabarina, Salem Hadid confirmed that he was very surprised that a distinguished striker, the top scorer of the league and the national team, like Ali Mabkhout, was excluded. He said: “It is not convincing that Ali Mabkhout was not chosen with the national team in the Gulf Cup. We have seen that the national team owns the field, presses and attacks, but there is no one to end the attacks.

• 5 official matches played by the national team under the leadership of coach Aruabarina, losing in 4 and winning in one.