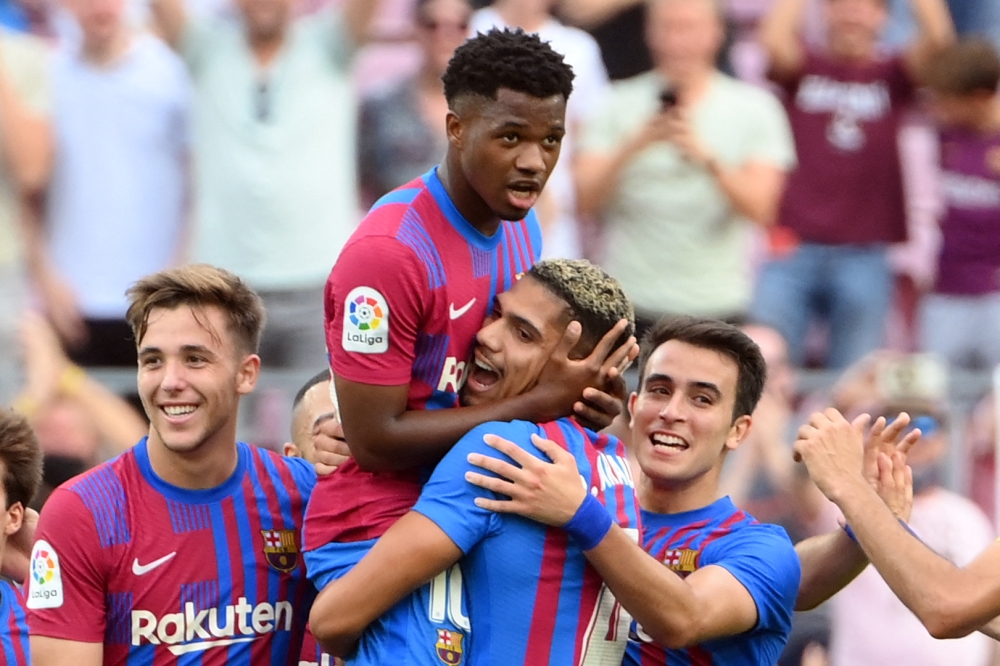 The floundering Barcelona returned to the path of victories by winning, Sunday, its guest Levante 3-0 in the seventh stage of the Spanish Football League, thanks to the Dutch duo Memphis Depay and Luke de Jong and the returning Spaniard Ansu Fati with the legendary No. 10 shirt.
This victory relieved the pressure a little on Dutch coach Ronald Koeman, who was suspended for two games, after a series of poor results for the team.
Promising Fati returned to competitions for the first time since last November due to an injury that kept him out of action. He is carrying the No. 10 shirt, succeeding Argentine legend Lionel Messi, who moved this season to Paris Saint-Germain.
The 18-year-old came as a substitute in the 81st minute before scoring the team’s third goal in stoppage time, his first with the number 10, after Depay (7 penalty kick) opened the scoring before his compatriot Luke de Jong (14) doubled the score, in a match Its outcome would have been harsher had it not been for the brilliance of goalkeeper Aitor Fernandez.
Barcelona is going through a difficult period after falling into the trap of a draw in the last two league games against Granada and Cadiz, preceded by a harsh 3-0 loss at home against Bayern Munich in the opening of its Champions League campaign.
Koeman, who is facing great pressure due to the disappointing results of his team, the modest performance of the players and his tactics, was absent due to his expulsion in the last minute of the match against Cadiz after protesting against the presence of a second ball on the field. Koeman will also miss the match against his host Atletico Madrid, the defending champion, on the second of next October, in the eighth stage.
Dutchman Frenkie de Jong was also absent from the match after being sent off in the previous match after two yellow cards.
With its third victory this season against three draws (it has a postponed match against Seville), the Catalan team raised its score to 12 points in fifth place, while Levante suffered a third loss against four draws.
Debye, who is coming from Lyon, opened the scoring this season, after he got himself a penalty kick after being fouled by Serbian Nemanja Radoja, who successfully translated it (7).
De Jong, who arrived from Seville at the beginning of the season on loan and is still trying to find himself with the team, doubled the progress of the hosts after he received a through pass from the American Serginio Dest into the area, followed to the right of the goalkeeper (14).
The Catalan club imposed almost absolute dominance of the match and almost came out with a greater result, and its pressure resulted in a third goal from Fati 10 minutes after he came on as a substitute with a shot from outside the penalty area that settled in the net (90 + 1).
His colleagues celebrated him by raising him in the air before heading to his family members present behind the bench and embracing them amid the joy of the fans at the “Camp Nou” stadium.