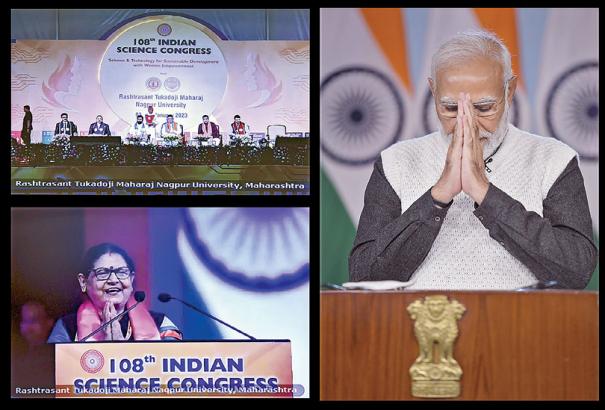 Prime Minister Modi inaugurated the 108th Indian Science Congress in Nagpur, Maharashtra yesterday through video. He then spoke on the topic ‘Sustainable Development with Women Empowerment through Science and Technology’.

Development in science should be aimed at meeting the needs of India.

The demand for energy in the country is increasing. We need to make scientific discoveries that benefit the field.

About 17-18 percent of the world’s population lives in India. Hence, such a huge population growth will lead to a global growth spurt.

In the Global Science Innovation Index, India has moved up from 81st position in 2015 to 40th position. When scientific discovery efforts become great achievements, it can make a big difference in real life as well.

Our country’s scientific capacity is crucial for India’s development journey in the next 25 years. India’s information and technology development in the 21st century has been astounding.

India is one of the top 3 countries in terms of growth of start-up companies globally.

In the context of India’s assumption of the G-20 leadership, women-led development is being given greater importance. Whether it is the small and micro business sector or the leadership of large start-up companies, women’s leadership skills are emerging. Women’s participation in science is increasing.

The most sophisticated equipment should be manufactured in India through scientific technology. New ways to cure diseases should be discovered. Efforts should be made to reduce post-harvest costs of small grains with the help of biotechnology. This was said by Prime Minister Modi.