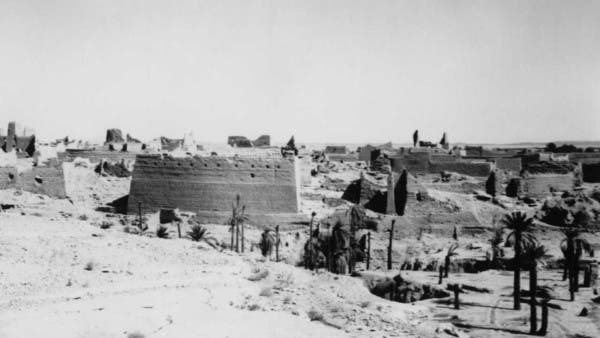 Prince Mani’ bin Rabi’a Al-Muradi is one of the most prominent figures who contributed to laying one of the building blocks of the Kingdom’s foundation, starting from the Mulaybid and Ghusaiba localities. Mana’ Al-Muradi is the grandfather of the Saudi royal family, and other families meet with her in lineage through this prince.

The lineage of this leader goes back to the Bani Hanifa tribe of Bakr bin Wael al-Rabiyah al-Adnaniyah, whose administrative and economic capital was Hajar al-Yamamah since the pre-Islamic era.

Historians mention how Mani’ al-Muraydi moved from Hajar al-Yamamah to eastern Arabia, and remained there for a period of time, and during that period the correspondence between this leader and his cousin Ibn Deraa, the prince of al-Yamamah, did not stop.

After that, Mani’ returned to the area of ​​Hajar al-Yamamah again, and his cousin, Prince Ibn Deraa, cut him off from the Mulaybid and Ghusaiba districts. Mani’ al-Muraydi, his sons and his offspring built it, and the places above Mulaybid and Ghusaiba belonged to the residents near them and their cousins ​​Al Yazid of Banu Hanifa.

Establishment of the capital of the first Saudi state

Historically, the villages of Mulaybid and Qusaiba formed the historical basis of the state established by the House of Saud, as it was built on the parts of Mulaybid and Qusaybah, and other parts of the neighboring town of Diriyah. Historians believe that the date of the arrival of the family of Mani’ Al-Muradi, dates back to the founding of Diriyah in the year 144, which was the capital of the first Saudi state.

The historical Diriyah is located in the northwest of Riyadh, 25 km away on the bank of Wadi Hanifa. Today, as a result of urban expansion, it is attached to Riyadh. Al Diriyah was known in the past by the name of Al-Daqeq and Ghubaira. Diriyah was called Al Diriyah and pronounced Diriyah as a signifier. Relative to the shields, who are from the Banu Hanifa tribe that settled in Wadi Hanifa and ruled Hajar al-Yamamah and Jaza’a.

The death of Prince Mana

After the death of the emir and leader Mani’ al-Muraydi, his son Rabia bin Mani’ took over the emirate, and the family began to grow and expand, and expanded with it and the building and architecture of the town of Diriyah grew, especially during the reign of Mani’ al-Muraydi’s grandson Musa bin Rabi’a bin Mani’, as well as during the reign of his son Ibrahim, who was insuring the pilgrims’ house God haram and protect their ways.

It is worth noting that the Al-Muraydi family won the rule of Diriyah, and the reins of matters are in her hands, and Rabia thought about expanding the area of ​​Diriyah, but he did not achieve what he wanted, until the matter became in the hands of his son Musa, who succeeded in annexing the villages of Al-Na’amiya and Al-Wasil.