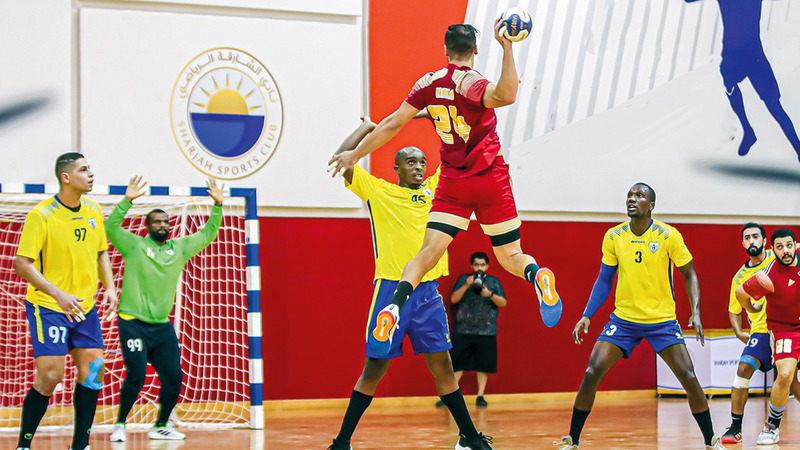 Yesterday, the delegation of the first handball team in the Sharjah Club left for the city of Sousse in Tunisia, to organize an external camp that extends until the 15th of this month, in preparation for participating in the Arab Club Championship, held in the Tunisian city of Hammamet during the period from 17 to 27 of this month, which qualifies for the Cup The Club World “Super Globe” in Saudi Arabia at the end of next month.

The handball supervisor at the Sharjah Club Jassem Mohammed told “Emirates Today”, “The external camp in the city of Sousse comes as a continuation of the stages of preparing the team, whether for Arab participation or local tournaments, which began early since the beginning of last August under the technical leadership of the Algerian team coach, Sufian Haani, Over the past week, it was followed by three friendly experiences, which brought together “Al-Malik” with Al-Ain, Dibba Al-Hisn and Maliha clubs.

He added: “The camp aims to put the final touches before the kickoff of the Arab tournament qualifying for the World Cup (Super Globe), as the Tunisian camp includes two additional friendly experiences for the team, with the aim of giving our players an additional opportunity to adapt to the method of physical strength, which is a general feature in Arab clubs. Coming from the African School.

He explained, “We rely heavily on the experiences of our coach, Sofiane, who comes from the African School, and knows our players well, especially since he previously led the team in the Asian Club Championships and won the bronze medal twice in a row in 2018-2019, but the technical level of the Arab championships is stronger than its Asian counterpart.

He added: “Our ambitions are great in the Arab Championship in Tunisia, but the task seems difficult in light of the presence of the champions of Asia and Africa, Kuwait, Kuwait and Zamalek, in addition to the presence of the Tunisian handball poles, the Esperance and African teams, and the Kuwaiti Salmiya. The Club World Cup will be in front of Zamalek, which includes four players from the Egyptian national team, which is one of the advanced teams on the world stage and a permanent competitor in the World Cup tournaments.

At the end of his speech, Jassem referred to the assignments that Sharjah made to support the ranks of the hand team, and the influential absences from the Arab championship, saying: “The contract with Al-Jazira players Abdulaziz Al-Junaibi and goalkeeper Ahmed Hassan, along with the professional trio, Tunisian Misbah Al-Sanei, Algerian Zuhair Naim, and Egyptian Mahmoud Fayez. In addition to compensating for effective absences in light of the inability of four of our players to travel to Tunisia, whether for injury, surgery or due to functional obligations, they are: Firas Mohammed, Dhahi Al-Yassi, Khaled Saeed, and Hamad Mohammed, who is one of the best rising young stars at the state level. .