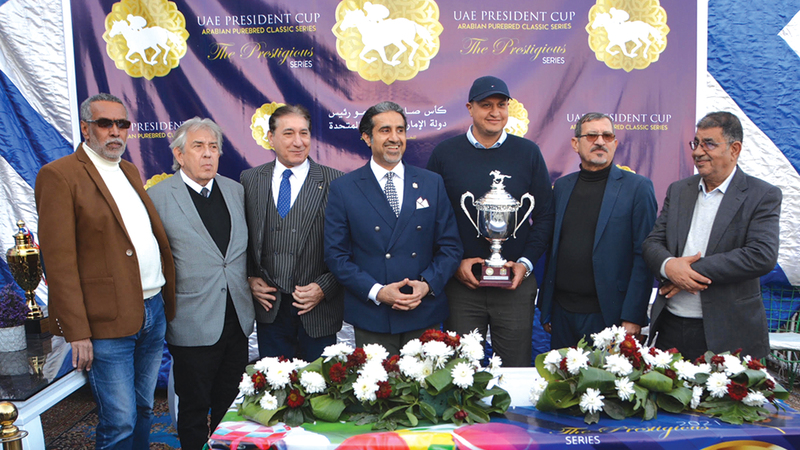 The horse “Johar Saafan”, which belongs to the Saafan Stables, retained the title of the 13th leg of the President’s Cup for purebred Arabian horses, which was held on Saturday at Al-Jazira Sports Club in Cairo, as part of the 28th edition of the series of races.

The hero, “Johar Saafan”, led by the jockey Ramadan Muhammad, succeeded in brilliance and retaining the title of the fourth round, the president, for the second year in a row, as he cut the race distance of 1600 meters in a time of 2:02:00 minutes, a difference in length from the second place “Murad Saafan”. The “Guardian of the Secretary” ranked third.

The festival also witnessed the participation of 41 horses in six runs, and the value of the races’ prizes amounted to 590,000 Egyptian pounds (up to 140,000 dirhams), which is the largest in the history of horse racing in Egypt since the establishment of the Supreme Authority for Horse Racing in 1890, and was held under the supervision of the Supreme Committee. The organization of the Cup series, headed by Matar Suhail Al Yabhouni, and under the general supervision of Faisal Al Rahmani, in cooperation with the Supreme Authority for Horse Racing in Egypt. The horse “Mared Akhenaten”, which belongs to Al-Azwa Stables, won the first half title over the Emirates Cup for Egyptian Arabian horses winning a race or more, over a distance of 1200 metres. And “Bint Al-Nil Badrawi” won the title of the third round of the Emirates Cup for Arab Egyptian Horses, over a distance of 1400 metres, while “Bashar Al Ali” was crowned with the title of the fifth race of 1,400 metres, which was held on the Emirates Cup for Egyptian horses, while he won Munadil Saafan won the sixth race of 1400 meters in the Emirates Cup for Egyptian Arabian horses Al-Ghasima.

The festival witnessed and crowned the winners, Faisal Al Rahmani, General Supervisor of the President’s Cup Series for Arabian Horses, Saeed Al Muhairi, representative of the Abu Dhabi Sports Council, Sherif Seif Al Nasr, Chairman of the Board of Directors of Al Jazira Sports Club, as well as representatives of the Supreme Authority for Horse Racing in Egypt. For his part, Faisal Al-Rahmani said: “The successes of the festival and the cohesion of brothers in Egypt to celebrate the historical march of the precious cup is not strange or new to them due to the common ties.” He added: “The UAE attaches great importance to the status and preservation of the purebred Arabian horses, and to raise their status as a pillar. Authentic from our ancient heritage, and to complete the vision and approach of the late founder Sheikh Zayed bin Sultan Al Nahyan, may his soul rest in peace, which our wise leadership followed and contributed to raising the status of Arabian horses and supporting horse owners and breeders in all Arab and international tracks, thanking His Highness Sheikh Mansour bin Zayed Al Nahyan, Deputy Prime Minister and Minister of Presidential Affairs, in appreciation of His Highness’ pioneering role in the march of the Arabian horse and its global races.

• He finished the race 1600 meters in a time of 2:02 minutes, a difference in length from the second place holder.