The Jordanian monarch stresses the pivotal role of Saudi Arabia, led by King Salman, in supporting the nation’s causes 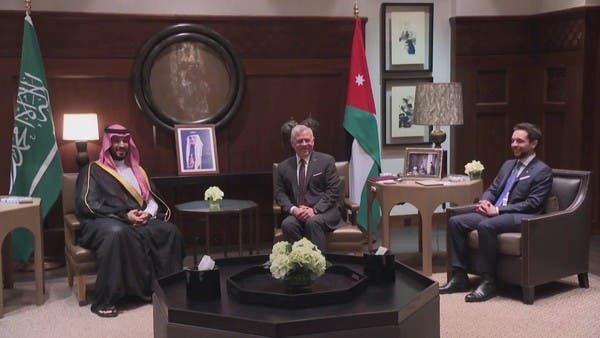 The Jordanian monarch stressed the pivotal role of Saudi Arabia, under the leadership of King Salman, in supporting the nation’s causes, while Prince Muhammad bin Salman stressed the Kingdom’s keenness to consolidate brotherly relations with Jordan, pointing out that the goal is to push for a new phase of cooperation for the benefit of Jordan and Saudi Arabia, and that there are great opportunities. In Jordan, it will benefit both countries.

Earlier on Tuesday, King Abdullah II of Jordan and Prince Hussein bin Abdullah II, his crown prince, received Prince Mohammed bin Salman, who arrived in the Kingdom at the head of a high-level delegation on a two-day official visit.

Upon his arrival at Queen Alia International Airport, the Saudi Crown Prince held an official reception ceremony, where the Saudi and Royal Jordanian anthems were played, and 21 artillery rounds were fired to salute the guest.

Upon entering the kingdom’s airspace, the Saudi Crown Prince’s plane was escorted by fighter planes belonging to the Royal Jordanian Air Force, who welcomed him.

The reception was also attended by Prime Minister Dr. Bishr Al-Khasawneh, Speaker of the Senate Faisal Al-Fayez, Speaker of Parliament Abdul Karim Al-Daghmi, President of the Judicial Council Muhammad Al-Ghaz, President of the Constitutional Court Hisham Al-Tal, Chief of the Royal Hashemite Court Youssef Hassan Al-Esawy, and Chairman of the Joint Chiefs of Staff Major General Youssef Al-Hunaiti. The Director of General Intelligence, Major General Ahmed Hosni, the Director of His Majesty’s Office, Dr. Jaafar Hassan, the King’s advisors, the ministers, the Mayor of Amman, the Director of Public Security, senior civilian and military officials, the Jordanian ambassadors in Riyadh, and the Saudi ambassadors in Amman.

Prince Mohammed bin Salman is scheduled to spend the night in Jordan before leaving.

During the visit, the Saudi crown prince will discuss a number of regional and international issues and the strengthening of relations in various fields.

On Tuesday, Egyptian President Abdel-Fattah El-Sisi received Prince Muhammad bin Salman bin Abdulaziz, at the Federal Palace, where the official reception ceremony was held and the two national anthems were played, according to the official spokesman for the Egyptian presidency, Bassam Radi.

The visit of the Saudi Crown Prince to Egypt came as part of his tour that will also include Jordan and Turkey.

The visit of the Saudi Crown Prince to Egypt included the signing of a number of agreements, and the conclusion of deals between the private sector in the two countries, at the headquarters of the General Authority for Investment and Free Zones.

It is noteworthy that the visit of the Saudi Crown Prince to Egypt is the fourth visit during the past five years, in addition to the informal meetings that brought together Prince Mohammed bin Salman and President Sisi.

A statement issued by the Saudi Royal Court said: “The Saudi Crown Prince, at the direction of the Custodian of the Two Holy Mosques King Salman bin Abdulaziz Al Saud, and based on his keenness to communicate and strengthen relations between the Kingdom and brotherly countries in all fields, and in response to the invitations made to Prince Muhammad bin Salman. Bin Abdulaziz Al Saud, Crown Prince and Deputy Prime Minister, has left to visit (the Arab Republic of Egypt, the Hashemite Kingdom of Jordan, and the Republic of Turkey). During these visits, he will meet with the leaders of these countries to discuss bilateral relations and ways to enhance them in various fields, and to discuss issues of concern. joint”.