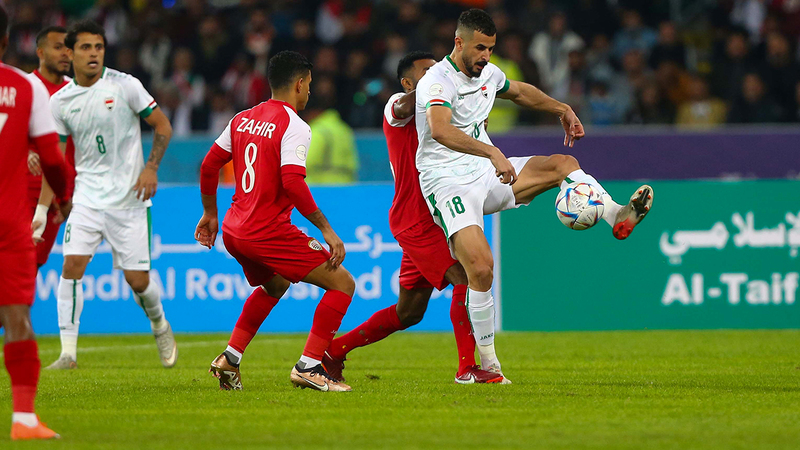 The Iraqi national team failed to break the historical knot that binds the hosts to the opening matches of the Arabian Gulf Cup, contenting itself with a goalless draw against Oman in the match you gathered yesterday, in the first round of Group A. The opening matches did not smile over the course of 13 consecutive editions for the host teams, as the last victory dates back to the 12th edition, when Al-Abyad defeated Qatar, with two unanswered goals scored by Adnan Al-Taliani and Muhammad Ali. With yesterday’s result, the Omani national team succeeds in maintaining its undefeated record against Iraq in the last five matches in the Gulf tournaments.

Oman scored a historic record by appearing for the eighth time in the opening matches, recording a single victory at the expense of “Al-Abyad” in the “Gulf 18” with two goals to one, losing four times and drawing three.

The first half was “scarce” in terms of opportunities, although Iraq started with an offensive rush, which was reinforced by Dergham Ismail, with a shot from outside the box, which the Omani goalkeeper pushed away with difficulty. Other than that opportunity, the first period of the match did not witness any significant attempts.

The second half witnessed some improvement, especially after the Omani team succeeded in absorbing the Iraqi pressure and seemed to appear at some periods in the middle of the homeowners’ court, which made it close in some periods to scoring.

The owners of the land appeared in their best period in the match with the 60th minute, when Ayman Hussein threatened Oman’s goal with a header that passed just past the left post.

After that, the performance of the Iraqis improved a lot from before, and they relied on cross balls in an attempt to take advantage of Ayman Hussein’s mastery of head strikes, which forced the Omani Red to fall back to what it was in the first session.

The most prominent Omani attempt in the match was by Arshad Al-Alawi, who fired a shot from a distance, but the ball, fortunately for goalkeeper Jalal Hashem, lost its way to the goal. The Omani advantage did not last long, as the Iraqi team regained its advantage again and threatened the goal of Ibrahim Al-Mukhaini, with a shot from a fixed kick played by Durgham Ismail, so that the ball hit the crossbar and then into the goalkeeper and turned into a corner kick.