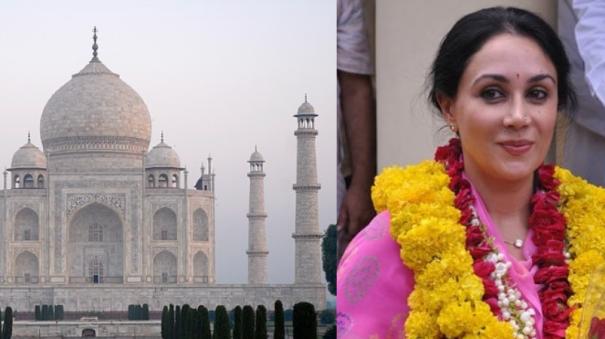 Jaipur: BJP MP Diya Kumari has said that the land on which the iconic Taj Mahal is located belongs to her family.

The Taj Mahal is located on the banks of the Yamuna River in the city of Agra in the Indian state of Uttar Pradesh. It is visited by thousands of foreigners and locals daily. One of the most important places in the world. This mahal was built by the Mughal emperor Shah Jahan in memory of his wife Mumtaz. History that it was built in the 17th century. It is customary for foreign leaders visiting India to visit here.

The Allahabad High Court has allowed a petition seeking an order from the Archaeological Survey of India to open 22 unoccupied rooms in the Taj Mahal and file a report. BJP MP Thea Kumari has said that the land where the Taj Mahal is located is their family property.

“Our land was on the site of the Taj Mahal. It is customary for the government to pay for the acquisition of privately owned land. I have heard that the king who ruled the land at that time paid compensation, but no one could speak out against it then because they were in power then.

We even have the document that the place belongs to us. It is kept safe in the records room of the Jaipur dynasty. We are prepared to grant it if the court issues an order. There is evidence that Shah Jahan acquired that land. I have not seen it in its entirety yet.

For that I did not say that the Taj Mahal should be demolished. But, everyone should know what is in the locked room there. The truth will come out if we open the doors of that room, “he said.

Thea is a member of the Rajsamand Parliamentary Constituency in Rajasthan. He is also said to have belonged to the Jaipur dynasty.