The last cap: will the victory over Rozenstruik restart Volkov’s career? 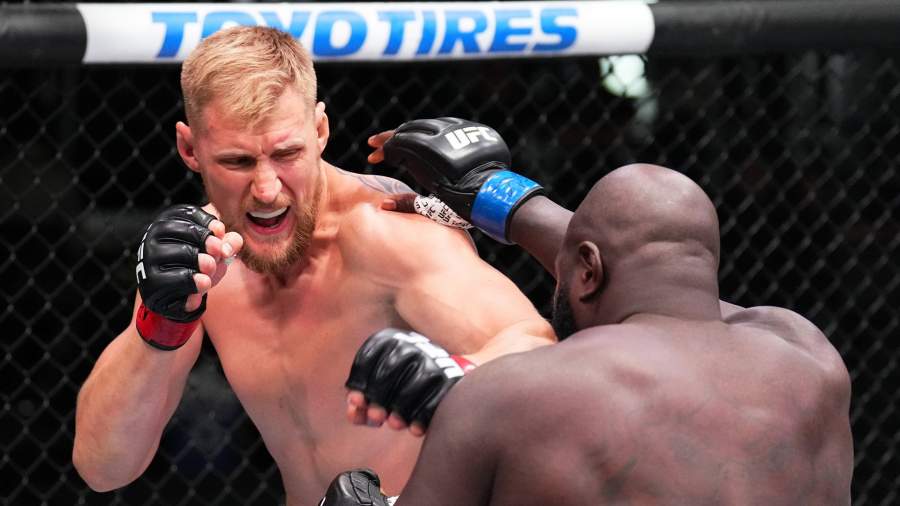 Russian heavyweight Alexander Volkov won by technical knockout over Surinamian Jairzinho Rozenstruik in the main fight of the UFC Fight Night 207 tournament. The athlete from Suriname did not agree with the referee’s decision, although it is rather difficult to call it controversial. The referee kept the health of the fighter: the situation for Rozenstruik was becoming critical.

A year ago, Alexander Volkov was close to a title fight in the UFC, but lost by unanimous decision to Cyril Gan. It was in June. In October, Volkov scored a rather nondescript victory over Marcin Tybura, and in April 2022 he suffered a crushing defeat from Tom Aspinall. There was a moment when Volkov knocked Aspinall down, but in general he looked worse in the standing position, and in the stalls the Englishman tore him to pieces and won in the first round with a painful hold on his arm.

It was a tough loss, but Volkov didn’t take a long break, agreeing to fight Jairzinho Rozenstruik on short notice. Initially, the opponent of the Surinamese was supposed to be Tybura, but the Pole withdrew from the fight, and Volkov was offered to replace him.

This time, Alexander slightly changed the preparation for the fight. In Moscow, he trained for only a week, and the rest of the time he worked in Kislovodsk (three weeks) and California (two weeks). The composition of the corner has also changed. Coach Taras Kiyashko did not fly to America due to the lack of a visa, and Kenny Johnson from the Black House gym (he, however, is far from new to the Drago corner), a former UFC and Strikeforce fighter, TJ Dillashaw’s manager and friend Dana White, Tiki Ghosn, and Oleg Taktarov, the first Russian UFC champion.

Someone will say that Taktarov is only the winner of the UFC 6 tournament. But two years ago, the people who stood at the origins of the promotion – Art Davey and Bob Meyrowitz – said that it was Oleg Nikolaevich who became the first UFC champion from Russia.

The fact that Taktarov would second Volkov became known on the day of the fight. At the same tournament, he took a corner from Rinat Fakhretdinov, who defeated Andreas Mikhailidis by unanimous decision.

According to “Plan A”

Volkov’s opponent that night was more than serious. Rozenstruik came to MMA from kickboxing, he joined the UFC in 2019 and won four fights in a row. All are knockouts. In May 2020, Francis Ngannou demolished the Surinamese in 20 seconds, after which Jairzinho (his parents named him so in honor of the top scorer of the 1970 FIFA World Cup) fought four fights: he lost by decisions to Cyril Gan and Curtis Blaydes and defeated Junior dos Santos and August Sakai.

But despite all the achievements of the enemy, Volkov won a fairly quick victory – his fastest in the UFC. Alexander actively started the fight – with two kicks to the body. The Muscovite took possession of the center of the octagon, while the Surinamese was looking for a moment to strike. That moment came when Rozenstruik caught Volkov’s leg and flew forward with sweeping kicks. It became scary for Alexander, but he came out of a difficult situation unscathed. He even threw a punch back. Accurate or not – you have to watch on repeat.

And soon the fight itself ended: Volkov struck a magnificent right straight, Rozenstruik swam, Alexander began to finish him off, and referee Herb Dean stopped the fight. An early stop because Jairzinho got up right away? Hardly. Dean kept the fighter healthy because the situation was critical for Rozenstruik.

Although the Surinamese does not agree with this.

“I am a little confused by how the fight went and disappointed that it was stopped so equally,” the fighter wrote on Twitter. “It was a dangerous situation, but I was far from giving up. Did I lie sedated? That’s the same. Alexander and I just started the exchange, and this is what everyone wanted to see. Respect to Alexander for taking the fight. I don’t have any serious injuries and I want to fight again as soon as possible.”

Volkov, after the fight, told how he achieved a convincing victory and shared his plans for the future.

“Everything that was planned, I perfectly implemented, I didn’t make mistakes,” said the Russian. – My task was to prevent him from going forward and to return blow for blow. As a result, he had to back away, and then I did my job at the net. I had a “plan B” – to bring him to the ground and show how good I am in wrestling. However, I didn’t have to do it because “Plan A” worked. I have proven that I am one of the best strikers in the UFC. I’m ready to fight anyone. The situation in the division is rather difficult, because the champion is recovering from an injury, and fights with the participation of top heavyweights have already been announced for the fall. To get a title fight, I have to fight someone who is higher than me in the rankings. I, on the other hand, defeated an opponent with whom Gan went the whole distance. I am ready to fight anyone who is taller than me – just give me this opportunity.

Oleg Taktarov also believes that the Russian is able to return to the fight for the title.

– How important is this victory, given the previous defeats? For any athlete, one might say, this is a rebirth and self-confidence, ”said Konstantin Tszyu, the former absolute world boxing champion in light welterweight, in an interview with Izvestia. – I am very glad that he was able to cross himself once again. Hope everything works out for him now. Congratulations!