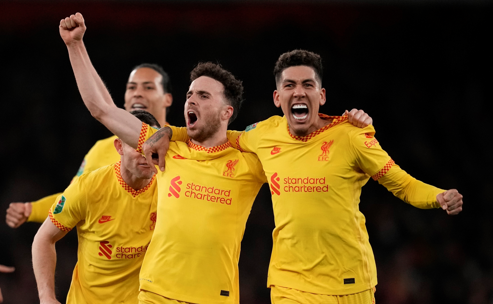 Liverpool coach Jurgen Klopp described Portugal’s Diogo Jota as a “high-class striker” after the Portuguese striker scored two goals in a 2-0 win at Arsenal to reach the League Cup final against Chelsea.

The former Wolverhampton Wanderers striker scored in the 19th minute and then added the second goal 13 minutes from the end as Liverpool won 2-0 on aggregate.

In the absence of Mohamed Salah and Sadio Mane to participate in the African Nations Cup, Jota succeeded in filling the void and raised his score to 14 goals in all competitions this season. “Diogo Jota is brilliant. We were convinced since his signing that he would help us very much,” Klopp said. “Since joining the team, he has taken another step in his development, transforming into a top-class striker.”

The German coach added, “The mixture of mentality and efficiency was the reason we signed him. He did not shine only tonight, yes he scored two goals, but he was very important for the team.”

Liverpool won the League and Champions League titles under Klopp’s leadership, but the team has not reached the League Cup final at Wembley since losing on penalties to Manchester City in the 2016 final. Klopp, whose team is seeking to win the League Cup for the ninth time, a record, said, “Wembley is an exceptional stadium, and we are all They know that. There are still a lot of matches before the final.”

“We put in a lot of effort in this tournament and wanted to reach the final. So when you get to the final, there is no reason to be a part of the final if you don’t want to win it.”