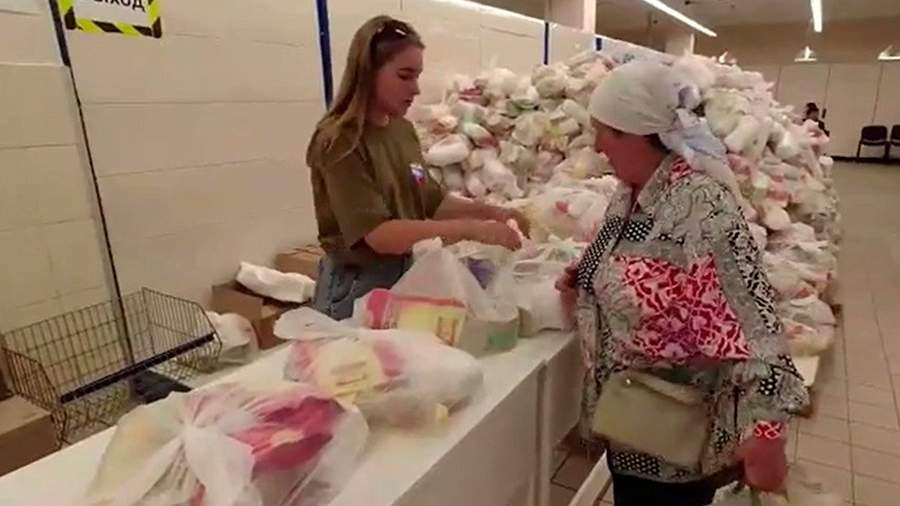 Russian servicemen delivered more than 150 tons of humanitarian aid to civilians in the liberated settlements of the Kharkiv region during a special military operation to protect Donbass. Footage from the scene was published by the Ministry of Defense on July 2.

Convoys with humanitarian aid to the cities and villages of the Kharkiv region arrive weekly. Trucks follow in a dense column, accompanied by armored vehicles of the military police of the Armed Forces of the Russian Federation. But with each new flight, it becomes more and more clear that there is nothing to fear.

People have been waiting for them since the morning to start unloading as early as possible. All the mechanisms have long been established: cargo acceptance, accounting and sorting, which now do not take much time. Every time more and more people volunteer to take part in the common cause.

Several tens of tons of humanitarian aid were unloaded in less than an hour. It’s all thanks to volunteers. There are dozens of them, they come here to help unload boxes of canned food, butter, cereals, bags of flour. All this will be packaged, humanitarian aid will go to residents of cities and surrounding villages in equal shares.

At the points of issue, packages with products are pre-formed. People come here early in the morning to get in line. They receive on themselves and relatives according to the lists and official papers.

Help comes to residents of the Kharkiv region from all over Russia, and not only from large enterprises.

An individual set of humanitarian aid for each person includes canned fish and meat, cookies, a pack of spaghetti, 2 kg of flour, butter and seaweed. There are more than a thousand such packages in the distribution center. Together with the products, people receive medicines, toys and diapers for the little ones. Schoolchildren are given stationery and educational books.

Also targeted humanitarian assistance was provided to elderly residents of the city, including veterans of the Great Patriotic War. Grocery kits and essentials were delivered on a regular city bus for socially unprotected citizens.

In order not to endanger the local residents of the city and not fall under the shelling of Ukrainian nationalists, the distribution of humanitarian aid is divided into districts. Food packages are brought to the elders in the districts, and they already receive food directly or at a designated place without creating large queues.

Thanks to humanitarian and administrative support in all cities and towns of Donbass controlled by Russian forces, today centralized municipal government has been restored and food supplies have been established. Markets and city services gradually come to life. Together with the military, people are restoring the infrastructure.