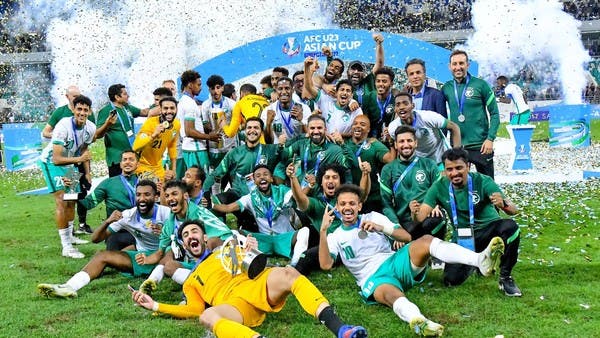 Prince Abdulaziz bin Turki Al-Faisal, Minister of Sports and President of the Saudi Olympic Committee, blessed the Saudi U-23 team’s victory in the Asian Cup at the expense of the Uzbekistan team.

The Saudi team crowned the AFC U-23 Championship after defeating Uzbekistan in Tashkent with two goals, which came with shots by Ahmed Al-Ghamdi and Nawaf Al-Braikan.

The Minister of Sports wrote on his Twitter account: “I extend my sincere congratulations to the Custodian of the Two Holy Mosques and His Highness, the Crown Prince, on the occasion of our Olympic team’s achievement of the 2022 Asian Cup. I congratulate my brother, Yasser Al-Mashal. Congratulations to our dear country, our heroes, and the technical and administrative bodies. We are all proud of what you have achieved.”

The Minister of Sports also announced the provision of a financial reward of one million riyals to each of the Saudi national team players and coach Saad Al-Shehri.