“The Mouse” deprives Ajman of victory.. Lapa misses the three points on Al-Ain in the 102nd minute 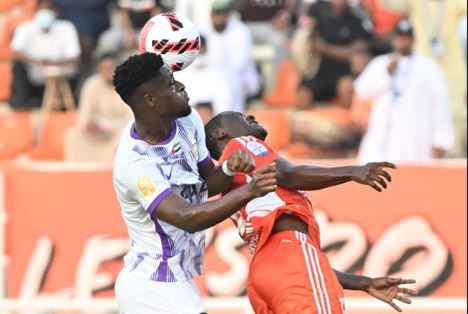 The Ajman team and its host Al Ain, the defending champion, were satisfied today with a 1-1 draw in a dramatic match that witnessed exciting events, and lasted until the 102nd minute, after the overtime time reached 12 minutes, although the referee counted six minutes. Ajman imposed itself strongly in the first round match of the ADNOC Professional League, and was very close to exiting with a historic victory.

The match witnessed the cancellation of the match referee, Ahmed Issa, a goal for Ajman, which was scored by the young substitute player Obaid Mohammed at the killer time “97”, and he was replaced by a penalty kick from a mistake committed by the same player Obaid Mohammed at the beginning of the attack, which ended with scoring a goal for Ajman after a great effort by Moroccan Walid Azzaro. But the league’s top scorer last season, Lapa Kodjo, refused the gift and strangely missed the penalty kick in the 102nd minute to deprive Al Ain of a decisive victory. The referee had also canceled, after returning to the “mouse”, a penalty kick for Al-Ain in the first half.

Ajman succeeded in absorbing the enthusiasm of the Al Ain players, and seemed a strong match for the title holder, after he managed to score a valuable point. It is noteworthy that Al-Ain opened the scoring through Brazilian Eric in the 6th minute, but Bahraini Ali Mudon scored the equalizer in the second half for Ajman in the 60th minute with a powerful shot at Al-Ainawi’s goal.