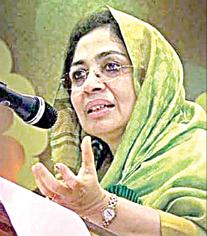 Elections to the Kerala Legislative Assembly will be held on April 6 in a single phase. Indian Union in the Congress-led United Democratic Front (UDF) Muslim League The party (IUML) plays the element.

The IUML has been allotted 27 seats in this election. The IUML has released a list of Wade Ballards for 25 of them. Noorbina Rashid has been declared as the candidate for Kozhikode South constituency. The party’s general secretary, Kunjalikutty, has resigned from his Lok Sabha seat and is contesting from Vangara constituency.

The IUML fielded Kamarunnisa Anwar 25 years ago in the 1996 elections. He lost to the Marxist candidate by a margin of 8,000 votes. Women have not been given a chance since then. In this case, Nurbina has changed the course of history. Lawyer Noorpina was the general secretary of the state women’s committee in the Muslim League. She has also been a member of the State Women’s Commission.

Noorbina Rashid told the Hindu Tamil newspaper, “I am the only Muslim woman in Kerala who was a lawyer in the criminal sector in the 1980s. I formed the IUML Women’s Division based on my experience working with people. I am the only female member of the IUML Political Affairs Committee. I will maintain the confidence that the party has in me. I hope it will be a big success, ”he said.