The national team clings to a “glimmer of hope” against Qatar 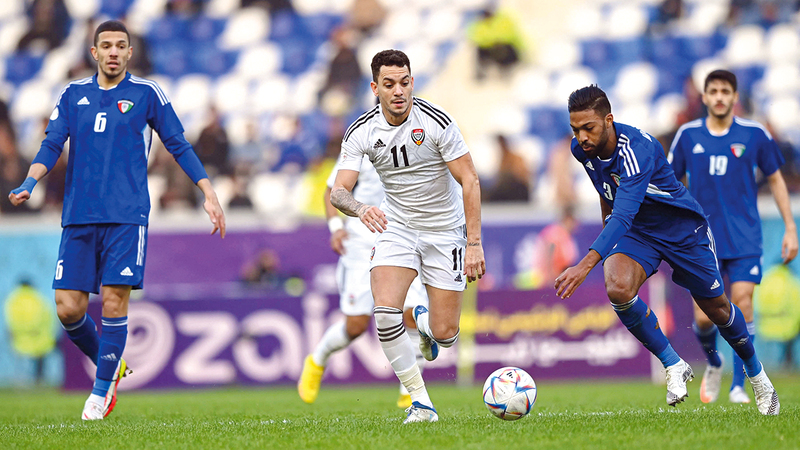 The national football team clings to a glimmer of hope to qualify for the semi-finals of the “Gulf 25”, which is currently being held in the Iraqi city of Basra, when it faces the Qatari team at the end of the first round of the second group matches at seven o’clock this evening at the Al-Mina Stadium, while Bahrain meets Kuwait. At the same time, at Basra Stadium. The Bahrain national team leads the group with six points (has 4 goals and deserves 2), but despite that, it has not decided its qualification, and comes behind it the Qatar team with three points (it has 3 goals and it has 2), and Kuwait has three points (it has a goal and it has 2) and “Al-Abyad” Fourth without points (has one goal and he has 3).

Al-Abyad has only one chance to guarantee qualification, which is to beat Qatar by two goals, and Kuwait loses to Bahrain by any result. This is to maintain his hopes of competing for the title, which has been absent from his coffers for 10 years. According to Article 7 of the competition regulations, there are six conditions for determining the qualifiers for any group in the event that two or more teams are equal in points, namely: goal difference, most scored, goal difference in all matches, most scored in all matches, least in cards, and finally a lottery. .

A state of uncertainty dominates the fans of “Al-Abyad”, due to their loss of conviction in the capabilities of the coach of the national team, Aruabarina, and the lack of experience of a large number of players who were summoned by the coach, and the exclusion of prominent players, led by the national team’s top scorer, Ali Mabkhout. The team plays the match without pressure, as the “white” has nothing to lose, like the rest of the teams, since its chance is very small in the first place, and it depends on others, unlike the rest of the teams that have control over their affairs in their hands, and they will be under great pressure.

There are doubts about the participation of striker Fabio Lima in today’s confrontation, in light of the injury he suffered before the start of the tournament.

For his part, the Portuguese coach of Qatar, Bruno Miguel, praised the UAE national team, and considered that the results he achieved by losing in the first and second rounds did not reflect his quality.

• The only chance for Al-Abyad to reach the semi-finals by defeating Qatar and losing to Kuwait.

Bahrain and Kuwait.. “Error is forbidden”

Bahrain, the leader of the second group with six points, raises the slogan “mistake is forbidden” against Kuwait, to avoid any surprises that may knock him out of the tournament, although he is the favorite to qualify, but despite that he did not guarantee the round of 4 card, as it suffices him to draw, or even lose while waiting for a result. Meeting «white» and Kuwait. Bahrain coach, Portuguese Sousa, said that his goal now is to win and then think about the next.

On the other hand, Kuwait does not have much opportunity, and is betting on the renewed squad. “People talk a lot about pressure,” said Kuwait coach, Portuguese Roy Pinto. “We seek to enjoy playing. Pressure is only called a cooking pot and football is a game.”

For a full review of the topic, Please click on this link.