The national team’s performance was “disappointing”. The story continues 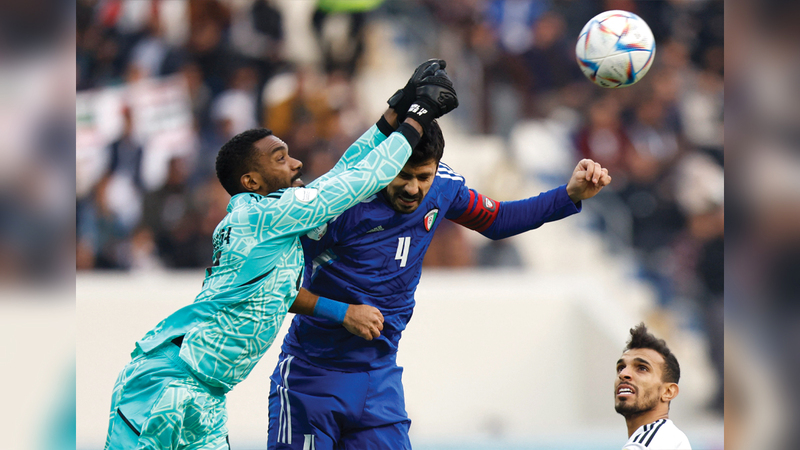 The national team disappointed expectations again in the Arab Gulf Cup Football Championship by losing the second match in a row, which came this time against its Kuwaiti counterpart with a goal without a response in the fatal time (90 + 3), in a meeting in which the “white” did not intercede for him to achieve The victory or even put its mark in the tournament, especially since the loss came at a time when the fans were placing their hopes on the players and waiting for a reaction from the players after losing in the opening round against Bahrain to correct the course, but the state of uncertainty still continues towards the team.

It was remarkable that the national team appeared with two personalities during the same match. In the first, its performance was very careful to the extent that it only fired one ball towards the goal, and it was in the last minute from the header of the pivot player, Majid Rashid, which revealed the state of offensive deficit and the failure to invest the time factor, especially since it He was also required to win in order to expand his chances of competing for one of the two qualification cards.

The Al-Abyad players faced difficulties similar to the first match, specifically in the area of ​​maneuvers, which clearly caused the financing of the attack line. White” they run in search of her.

The minutes in the middle of the first half sounded the alarm of the need to abandon one of the axis players, Muhammad Abdul Basit and Majid Rashid, and push one of the wings, similar to Ali Saleh or Yahya Al-Ghassani, to rely on the long transmission method, to take advantage of the party’s speed instead of the long journey that begins with searching for the ball and exaggerating preparation and penetration. From the depth, which is the method that experience during the meeting proved its inability.

During the second half, the national team was better off than the first in comparison to the number of opportunities the players had, and the kicks of the duo Caio Canedo and Hareb Abdullah were the most dangerous on the Kuwaiti goal, but the chances that the duo created, in addition to other opportunities, did not result in goals, due to the factor of haste or Not passing it as quickly as possible to another player in a better position.

It is true that the substitutions made by Argentine coach Rodolfo Arwabarina during the second half contributed to reviving the offensive line, especially with the participation of the duo Ali Saleh and Yahya Al-Ghassani, but that was at the expense of the back line, as the coach abandoned the two-axis and used the young player Falah Walid to face alone the strength of the midfield. Kuwaiti.

In the face of the mental effort of the national team players in the first half in their endeavor to share performance with the Kuwaiti players and the state of caution against receiving a goal, and the physical effort in the second half in their offensive attempts, the players’ fitness was clearly affected, and this resulted in a state of mental wandering for the players, which was demonstrated by the error on the defensive side during Receiving the only goal of the match in the 90 + 3 minute. It is noteworthy that the national team was defeated in the first round by Bahrain, the “defending champion”, with a score of 1-2.

• The national team appeared with two personalities during the match… The first was “cautious” and the second was “hasty”.

• Al-Abyad players faced difficulties similar to the first match in the maneuvering area.

• The participation of Ali Saleh and Yahya Al-Ghassani activated the attack, but at the expense of the back line.