The net agreement .. a knot that Romarinho could not solve 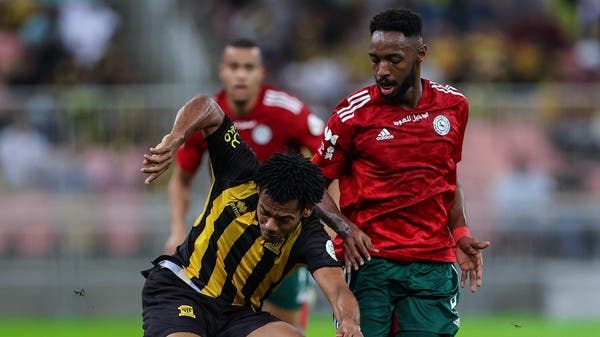 The agreement prevented the Brazilian striker Romarinho from Al Ittihad Jeddah during all the previous two confrontations in which the player was in the Mohammed bin Salman Professional Cup.

The Brazilian seeks to net his next opponent and help his team win three crucial points during the title struggle, when Al Ittihad Jeddah is a guest of the agreement at Prince Muhammad bin Fahd Stadium in Dammam on Thursday.

The agreement is the only team that Romarinho has faced in more than two league matches without conceding a net, as its outcome in the past 7 matches was only two assists.

Al-Ittihad’s top scorer moved during the current season with 18 goals to the ranks of Asfar Al-Gharbia at the beginning of the 2018-2019 season, after which he met the agreement on seven occasions, all in the local competition, winning four matches and drawing in three others.

Romarinho lost his first match against the city of Dammam with a goal scored by Muhammad Al-Kwekibi in the first leg of the 2018-2019 season, and Al-Ittihad won two goals without a response, scored by Abdulaziz Al-Bishi and made by Romarinho.

In the following season, Al-Ittihad won the first leg 2-1 outside its bases with goals by Abdelilah Al-Maliki and Cedric Yambere by mistake, and Fahd Al-Muwallad’s penalty kick decided the three points for his team in the second leg, without a significant imprint for Romarinho.

The agreement achieved two victories over Al Ittihad of Jeddah last season, outside and inside its territory, with two goals to one and two goals without a response, with the presence of the Brazilian striker, before Al Ittihad won the match this season by three goals to two goals signed by Harun Kamara (two goals) and Ziad Al-Sahafi.

Romarinho played 629 minutes in front of Al-Ettifaq, as he started the previous seven matches, and was substituted during a single meeting in the 89th minute.

Al-Ettifaq is among the list of teams that Romarinho could not score in the Saudi League, which also includes one and Al-Adala, as he played in the first two home and away matches during the 2018-2019 season before the relegation of the club belonging to Al-Madina Al-Munawwarah, and fought two confrontations against the second in the 2019-2020 season. During his time in the league, with a total of 360 minutes without scoring or passing any decisive pass.